James Lawrence is a top motivational speaker, endurance world record holder, triathlete, and subject of the documentary The Iron Cowboy: The Story of the 50.50.50. Known to the world as The Iron Cowboy for wearing a cowboy hat during Ironman races, James completed the greatest feat of human endurance in 2015: 50 full distance triathlons, in 50 states, in 50 consecutive days (50.50.50).

When James Lawrence (aka the Iron Cowboy) announced his plan to complete 50 Ironmans in 50 consecutive days in all 50 states, the only person who believed that he could pull it off was James himself (and his wife, Sunny). An Ironman consists of a 2.4-mile swim, a 112...

When James Lawrence (aka the Iron Cowboy) announced his plan to complete 50 Ironmans in 50 consecutive days in all 50 states, the only person who believed that he could pull it off was James himself (and his wife, Sunny). An Ironman consists of a 2.4-mile swim, a 112-mile bike ride, and a 26.2-mile run. In Lawrence’s case, he would have to complete those distances and then make it to the next state in time to do it all over again the next day. Even Lawrence’s coach didn’t think he could do it; he penciled in another event the day Lawrence was supposed to complete the challenge. But with the support of Sunny and their five children in tow, and with grassroots support conjured always at the last minute via Facebook, Lawrence accomplished exactly what he set out to do. Iron Cowboy is the story of Lawrence’s herculean 50-day journey and all the wonderful, miserable, and life-threatening events that happened along the way, as well as a glance at his life leading up to the mission, and winning two prior world records.

Lawrence holds two world records in the Guinness Book of World Records: one for completing 22 half-Ironmans in one year (2010) and one for completing 30 full Ironmans in one year (2012). In 2015, he set a record for completing 50 Ironman distances in 50 states in 50 days. Through social media and press, Lawrence was able to find fans in each state—anywhere from 3 to 500 people—to complete some of the Ironman alongside him, and supporters were invited to join him for the Iron Cowboy 5k (the last 3.1 miles of James’s marathon); for his last Ironman in his home state of Utah, more than 3,500 people showed up. Along the way, Lawrence survived tropical storms, internal bleeding, hypothermia, hyperthermia, dehydration, nerve damage, infected foot blisters, a blood-clot scare, extreme sleep deprivation (he only got four to five hours of sleep each night), and a bike crash!

James Lawrence is a top motivational speaker, endurance world record holder, triathlete, and subject of the documentary The Iron Cowboy: The Story of the 50.50.50. Known to the world as The Iron Cowboy for wearing a cowboy hat during Ironman races, Lawrence rose to fame for setting multiple endurance records. In 2015, James completed the greatest feat of human endurance: 50 full distance triathlons, in 50 states, in 50 consecutive days (50.50.50).

James didn’t grow up an endurance athlete. In fact, he could barely finish his first 5k at the age of 28. But that failure fueled a competitive spirit, and a desire to achieve something his current body told him was impossible.

“I was determined to NOT let my failure define me.” Years of focused training shaped James to become an elite short-distance triathlete. Along the way, he learned to push past his mental limits and find his true physical boundaries.

In  2010, James set out on a journey to find those physical limitations. He set his first World Record by completing 22 70.3 Ironman races in just 30 weeks, exceeding the previous record of 20.

“There was a fire inside, and I had to let it burn.” But James did not find his limit – he could reach higher. In 2012 he set his second world record by completing 30 full-distance triathlons in less than 52 weeks, across 11 countries, crushing the previous world record of 22. It was then James realized his limitations weren’t physical, they were mental.

“I knew I could do more, reach higher.” Determined, James set out to find his mental limit and test his focus, determination, and will power, James set out to complete something everyone told him was impossible. Two and half years of strictly regimented training prepared James to attempt this feat. But physical preparation was not enough to carry him through. On July 25, 2015, James overcame all odds and defied all doubts by completing 50 full distance triathlons, in 50 states, in 50 consecutive days (50.50.50). Completing what is now considered the greatest feat of human endurance.

Every one of us has experienced a time in life when we reach our limit; physically, mentially, emotionally, spiritually. But each of us CAN achieve more, reach higher, raise the bar and silence the doubters. James story of reaching new limits is one every company, school, organization and individual can relate to. He is an ordinary guy, whose extraordinary personal story will make you laugh, cry, reflect, and leave you inspired to reach higher.

…when it comes to endurance, he is unstoppable.

From start to finish, our P&G experience with James has been phenomenal. We appreciated him taking time to meet with us 3 times before the event for us to ground him on the event theme, provide information on our community and share key needs we were hoping to address during the event. It really felt and came across that he listened to our feedback because the keynote he delivered felt perfectly tailored for our community and event!

I’ve received overwhelmingly positive feedback on James keynote from the attendees. They raved about him with one of the top quotes being “James was the best speaker we’ve heard at one of our events in the last few years if not EVER!!” He really brought his Iron Cowboy presence to stage as he captivated our community with his experience weaving in the images, quotes and videos perfectly. He was charming and memorable even when we had a tech malfunction with the video – he kept the energy of the attendees high throughout.

His example of being your authentic self during Q&A was also great for our community to see. Everyone had a great takeaway that they could reapply on mental toughness. I also had several members of our community ask about booking information, as they were interesting in finding out how to get James back to speak to their groups at their various sites across the US and Canada. So hopefully this generates some repeat bookings for him as I think there are lots of folks in our company who can really benefit from hearing his message.

We enjoyed our time with James tremendously. His stories were able to inspire so many of us with his message about the resiliency of the human spirit, and the power our decisions can have over our circumstances. He will leave you feeling encouraged, motivated, and ready to do something impactful!

…the story that I heard James talk about not only made me tear up and cry about 3 or 4 times while he was speaking. That led into a drive home with sobbing and just being overwhelmingly happy with the knowledge that I had gained from listening and knowing that now I could do whatever I wanted to do…James “IRON COWBOY” Lawrence, Thank you, Sir!!! 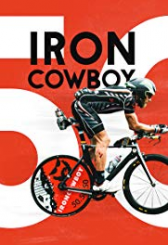 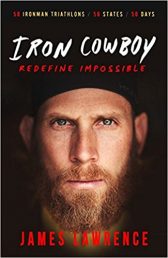 “If you’re tired of starting over, stop giving up. How many of you look back on your lives and can...

The Iron Cowboy Explains The Right Mindset for Success

Extraordinary feats are within your grasp. If you’ve ever seen a colleague receive an award, watched an athlete cross a...