Jimmy Johnson is the architect of the Dallas Cowboys’ consecutive victories in Super Bowls XXVII and XXVIII, a former Miami Dolphins coach, and member of Fox’s NFL Sunday team. The first head coach to win both a National Collegiate Championship and a Super Bowl Championship, Johnson is a proven leader and motivator. Johnson is also the author of the autobiography Turning the Thing Around: Pulling America’s Team Out of the Dumps-And Myself Out of the Doghouse, which chronicles his life and coaching experience. It’s the ultimate insider’s look at football from one of the true masters of the sport.

Johnson served as the Cowboys’ head coach from 1989 to March 1994, and he is one of only five head coaches in NFL history to lead a team to back-to-back Super Bowl wins. Johnson was named NFL Coach of the Year for three of his final four years with the Cowboys. He also served as head coach and general manager for the Miami Dolphins from 1996-2000, retiring with an 80-64 regular-season record as a NFL head coach, and a 9-4 postseason mark. Additionally, Johnson as the head coach of the University of Miami Hurricanes, compiling a 52-9 record, two Orange Bowl titles, two number two finishes, and a National Championship in 1987.

Johnson joined Fox Sports in April 1994 to serve as an analyst on the network’s fledgling pre-game show, NFL Sunday. Immediately, the show established itself as the overwhelming fan favorite, winning 16 Emmy Awards in eight years, including four for “Best Studio Show.” 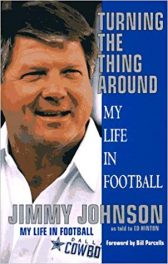