Critical Thinking for a Complex World

Understanding Systems and How They Misbehave

John Renesch is an advisor, mentor, futurist and writer on matters of social and organizational change. He believes that commerce holds the key to bringing about a global shift of human consciousness thus creating a future of tremendous possibility for humankind – the possibility that will allow humanity to transcend the inevitable future that can be projected from current trends.

He offers a variety of services as an international keynote speaker, private mentor and advisor to consultants. He has published 14 books to date, his latest being  The Great Growing Up, which received the 2013 Grand Prize for Non-Fiction from the Next Generation Indie Books Awards. He publishes a monthly newsletter called John Renesch’s Mini-Keynote.

John has four decades of experience as a business owner and entrepreneur. He left his chief executive position in the real estate investment industry in the mid-1980s and, after a period of personal introspection prompted by his concerns for the future, he embarked upon a new path.

From 1990 to 1997, he served as publisher and editor-in-chief of New Leaders Press, dedicated to publishing progressive business books and periodicals. John has created twelve business anthologies on the subject of business and transformation. Over 300 visionaries have contributed to these books.

John is now a global futurist, humanitarian, writer and keynote speaker on topics that integrate the subjects of business, human consciousness and possible scenarios for the future of humanity. He has also become a social activist, an advocate of social and organizational transformation and awakening what he sees as the latent potentialities of the human race. John is not an ordinary futurist who mostly downloads from the past. He listens to what wants to happen and with unlimited possibilities he becomes a champion of that future.

John is a member of the practitioner faculty for the Center for Leadership Studies, member of the International Editorial Board of The Journal of Values-Based Leadership, past member and project advisor and guest blogger for the World Future Society, former member and Inaugural Board Chair of the Shaping Tomorrow’s Foresight Network,  and Co-founder of FutureShapers, LLC.

“John Renesch is a beacon lighting the path of the new paradigm in business.”

“John’s presentation helped us grasp the context for our responses to the rapidly expanding rate of change in our organization. His insights helped each of us understand the role of our thinking and choices in working within our organization, allowing each of us to find our own answers to the question, “I’m only one person, what can I do?” 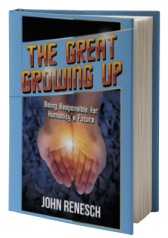