Learn the skills that have proven significant improvement on results in areas such as productivity, bottom line, quality, teamwork, safety, and employee satisfaction.

Learn to get past performance barriers to your success by holding others accountable to commitments, getting to the root cause of accountability problems, addressing poor performance effectively, and motivating others without using power.

Influencer: The Power to Change Anything

You will learn to successfully lead change initiatives, diagnose the real causes behind problems and create real solutions, transform corporate culture, and influence behavior across the organization with or without formal authority.

Leaders who use four or more sources of influence when approaching resistant problems are ten times more likely to succeed. Create a winning strategy with the six sources of Influence outlined in the New York Times bestseller Influencer: The Power to Change ...

Leaders who use four or more sources of influence when approaching resistant problems are ten times more likely to succeed. Create a winning strategy with the six sources of Influence outlined in the New York Times bestseller Influencer: The Power to Change Anything.

Companies who handled these conversations well accelerated response to downturns, found tens of millions of dollars in additional savings opportunities, and avoided the political and defensive behaviors that held other companies back.

Prevent “accidents waiting to happen” by learning how to recognize and address these behaviors that put safety at risk.

Joseph Grenny’s Key Accomplishments Include . . .Over the past twenty years, Joseph Grenny has taught and advised over 100,000 leaders on every major continent, from the boardrooms of Fortune 500 companies to the slums of Nairobi, Kenya. Joseph Grenny has advised CEOs and senior executives on more than a dozen major change initiatives—receiving credit from Lockheed Martin Aeronautics’ President as a key factor in helping the organization win the $200 billion Joint Strike Fighter program.

An expert on topics ranging from influence and leadership to organizational change and effectiveness, Joseph Grenny has been cited in dozens of newspapers including the New York Times, Los Angeles Times, Washington Post, and the Wall Street Journal. He has also appeared on more than one hundred radio and television programs including ABC News, CNN, Bloomberg, CNBC, and the Today Show.

Formerly, Joseph Grenny was co-founder and president of California Computer Corporation. In 2007, he and his co-authors were named Ernst & Young “Entrepreneurs of the Year” for their work in founding and leading, a top corporate training and organizational development firm, which has helped more than three hundred of the Fortune 500 realize significant results using a proven method for driving rapid, sustainable, and measurable change in behaviors, reaching over two million people worldwide, and has been named the 2008 “Business of the Year” by The Association of Learning Providers.

“Crucial Conversations has given our employees comfort and confidence for dealing with difficult situations.”

“Crucial Conversations enables people to talk about what they might otherwise feel is politically incorrect, and it has changed our whole culture.”

Director of Leadership and Organizational Development 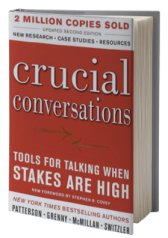 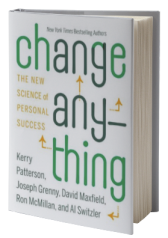