Judy Carter is a top leadership keynote speaker, transformational communication expert, and international humorist. Wielding the “power of the punch line,” Carter gets results both nationally and internationally with a hilarious and empowering keynote, speaking to government groups, professional associations, and Fortune 500 companies. She uplifts and entertains while sharing practical information that attendees can apply to their jobs as well as their daily lives.

When Things Get Dire – Inspire with “The Message of You”

In Carter’s presentation based on her new book, “The Message of You” (St. Martin’s Press), Carter reveals how to use stories as a leadership tool that gets others to listen, connect, and take action. Knowing and sharing your message...

In Carter’s presentation based on her new book, “The Message of You” (St. Martin’s Press), Carter reveals how to use stories as a leadership tool that gets others to listen, connect, and take action. Knowing and sharing your message creates stronger loyalty with your clients, motivates your staff and reminds you of what you stand for, so when things get dire – you can inspire.Take-Aways:

•  Become a Recognized Influencer & Immediately Connect with Your Audience.

•  Build executive presence by speaking your message rather than data.

•  Decrease stress by using your “Messes” to build your “MESSage”.

Stress IS a Laughing Matter: A Counterintuitive Approach to Stress Management

Judy illustrates the power of stories and humor and teaches us how to turn problems into punch lines, resolve conflict and build camaraderie so everyone will walk away with tools they can use immediately.

Her “Don’t get mad, get funny” philosophy inspires people to deal with issues such as change, new technology, work-life balance, and burnout — not to mention that overflowing inbox — with a sense of humor, rather than a sense of desperation.

•  Use humor to turn conflict into camaraderie.

•  How to joke appropriately.

How the Power of Your Story Can Increase Your Profits

•  Do people look like they have more important things to do when you speak? •  Is your “sales” pitch sounding phony? ...

•  Do people look like they have more important things to do when you speak?

•  Is your “sales” pitch sounding phony?

•  Have you lost touch with your passion for your job?

In this age of hype and market saturation, many people are competing for the same clients and customers. Your credentials and expertise isn’t always enough—AUTHENTICITY RULES. Now, more than ever, it’s critical to find out WHAT SETS YOU APART FROM THE CROWD. And they are your signature stories, taken from your own history: the Message of You.

In this presentation, acclaimed humorist and stress reduction expert Judy Carter, will share the secrets of her new best-selling book, to help you:

•  Lead with your message, rather than your credentials to connect with clients and customers.

•  Use your message to connect with clients via Social Media.

•  Craft your “credential story”—how you took your clients from “mess to success”.

Wielding the “power of the punch line,” Judy Carter gets results both nationally and internationally with a hilarious and empowering keynote, speaking to government groups, professional associations and Fortune 500 companies. She uplifts and entertains while sharing practical information that attendees can apply to their jobs as well as their daily lives.

Judy Carter has shared stages with President Bill Clinton, Deepak Chopra and Lily Tomlin. She’s in demand by corporations from Boeing to Blue Cross, Fed-ex to Farmer’s Insurance. As an international speaker, Judy Carter has taken her fun and profound address from Australia to Berlin, Canada to Hong Kong, demonstrating proven methods of transforming oneself through humor and teaching audiences how to take a different view of stressful and difficult events in life.

“You’re not in a difficult marriage — it’s comedy material,” she quips. “You don’t have the boss from hell — it’s a heckler. Your son wasn’t arrested on the TV show ‘Cops’ — you have a relative in show business.”

A graduate of USC’s theater program, Judy Carter was the first woman to play the Close-Up Gallery at Hollywood’s Magic Castle. Author of The Comedy Bible and Standup Comedy, she’s been featured on The Oprah Winfrey Show, taught workshops for stand-up comics, has worked with CEOs on their presentations, and developed a popular series of instructional DVDs.

More About Judy Carter . . .
Honing her comedy skills on stages from Caesar’s Palace to the Los Angeles Improv, Judy Carter was nominated for Atlantic City’s “Entertainer of the Year.” She brought her talent to the motivational speaking circuit, believing that her techniques could benefit even those who would never even think of stepping on a stage.

“I wanted to do more than make people laugh, I wanted to transform and inspire with a message they could take home.”

Judy Carter is a living example of the power of laughter. Like many funny people, she grew up in a dysfunctional family. When her mother said it would take a miracle for her disabled sister to walk, young Judy Carter obsessed over learning magic. “The biggest disappointment was I couldn’t get her out of her wheelchair. But I could pull a coin out of her ear and make her laugh.”

Bitten by the performing bug and realizing that she had a choice, to view life as a tragedy or as a comedy, Judy Carter chose humor.

“To me, comedy is not about putting other people down, it’s really about turning our problems into punch lines,” Carter says. “It’s just more fun to laugh–and I think it burns more calories. Anyone who comes to my show will lighten up and probably at the end of my talk — lose five pounds!”

Judy Carter and her spouse live in Venice Beach, California with permission from their cats and dogs.

“Our original goal was to provide a motivational meeting for our employees that allowed them to receive a focused message on managing change without feeling like they were being preached to! Your keynote address was perfect. It allowed us to laugh at ourselves and our processes and still be able to understand that we have to be flexible to survive in today’s world.”

“Your keynote address at our Spring Hospital Summit, Contact: One Patient at a Time, was a huge hit. You did an amazing job personalizing your talk to meet our audience’s needs. The address was motivating and very uplifting and helped set the tone for the entire meeting. The nurse care managers, supervisors and administrators present at the Summit had overwhelming positive comments on your talk. You have an amazing talent to bring levity and humor to some serious topics and would be an asset to any business function.”

“You were a hit! So many people came up to me and said that it was really a good choice to have someone with comedy background kick off our meeting. It’s not easy getting our group laughing at 9am, but you got them right at the start when you poked fun of our acronyms.Most of our group were directors from different countries and you really took the time to customize your speech, making sure everyone got it – even our reps from China.”

Judy — you were absolutely Delightful. Your humour was truly well suited to the audience — your style was great – and the material was I believe appreciated by all.

Of all the years, this year’s choice (you) was by far the very best. 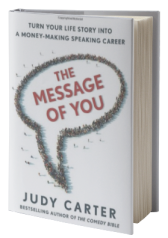