Inspirational Adventurers, Lifelong Friends and Achievers of the Impossible

Justin Skeesuck and Patrick Ray, use the power of storytelling about their life experiences and their credible 500-mile wheelchair journey through Spain, to demonstrate how to overcome the greatest of odds. Through Justin and Patrick’s powerful message, businesses and individuals alike discover how to be happier, more engaged, and more productive through the power of teamwork.

This talk is a series of stories Justin and Patrick share about their friendship, their decision to do the 500-mile journey on the Camino De Santiago, from Spain to France together – with Patrick pushing Justin in his wheelchair, and stories from the pilgrimage, ...

This talk is a series of stories Justin and Patrick share about their friendship, their decision to do the 500-mile journey on the Camino De Santiago, from Spain to France together – with Patrick pushing Justin in his wheelchair, and stories from the pilgrimage, including many lessons learned along the way. Themes are about companionship, self care, caring for others, allowing others to help, the power of community, perseverance and friendship.

This talk overviews their background and an abbreviated version of their pilgrimage on the Camino De Santiago with greater focus on stories about the small things that make the biggest difference in the lives of those around us. There are stories from people they’ve ...

This talk overviews their background and an abbreviated version of their pilgrimage on the Camino De Santiago with greater focus on stories about the small things that make the biggest difference in the lives of those around us. There are stories from people they’ve met from around the world in their speaking work, from their experience with Compassion International, and from their most recent accessible Camino journey with friends having a diverse range of abilities.

Justin Skeesuck and Patrick Gray have been blessed with a unique friendship that spans over 42 years. Despite the many challenges of a progressive neuromuscular disease robbing Justin of the use of his arms and legs, the two seek to live life without reservation. Their friendship has taken them on many adventures together; most notably their 500-mile wheelchair journey across the vast terrain of northern Spain.

When Justin got the idea to take on the ancient pilgrimage known as the Camino de Santiago, he knew there was no way he could take the journey alone. So he asked his best friend his thoughts on the epic adventure. Patrick’s response to Justin was simply, “I’ll push you!”

What began as an impossible journey between two best friends, evolved into one of the most powerful representations of what humanity is capable of accomplishing when we come together. Through the help of friends and strangers alike, Justin and Patrick accomplished what many said couldn’t be done.

As best-selling authors and highly sought after keynote speakers, Justin and Patrick use their life/work experiences and their adventures as the backdrop to which they explore concepts such as leadership, teamwork, relationship, and the power of the human collective. They believe the most successful individuals are those who understand their own limitations and invite others to be a part of their journey. Justin and Patrick’s humor and engaging storytelling leave readers and audience members asking, “What can I do to make my home, my work environment, and the world a better place?”

Donald Miller, New York Times Best-Selling Author and CEO of StoryBrand recently said “Justin and Patrick are two of the most inspiring and entertaining speakers I’ve heard. We are more than moved. We were changed after hearing their story!”

To date, Justin and Patrick have spoken to more than 200,000 individuals in a live setting. In 2017, they released their best-selling book “I’ll Push You”, and their award-winning documentary by the same title in more than 570 theaters nationwide. And in 2018, they released a best-selling children’s book “The Push: A Story of Friendship” making their story accessible to children.

“If you’re looking for an inspirational message about friendship, commitment, overcoming challenges, or the power of community, then I urge you to hire Justin and Patrick for your next speaking event. They will deliver, your attendees will be inspired, and you will look like a genius for deciding to share with your company, members, or conference attendees a life changing adventure.”

“A presentation offered by Patrick Gray and Justin Skeesuck entitled “I’ll Push You,” was among the liveliest, most searing and memorable events that we in the Garaventa Center for Catholic Intellectual Life and American Culture offered this past year. Their talk was stimulating spiritually and intellectually, and I endorse it enthusiastically for anyone contemplating booking Justin & Patrick for their next event!”

“One of the unique aspects of this speaking team is that the audience is given the perspective of a friend and co-journeyer. As powerful a story as Justin’s life is, it is equally moving to hear Patrick’s side of the story and to hear how emotionally straining it is to watch a best friend suffer. In a world that is often consumed with the superficial, our campus found ourselves struggling with the deeper truths of life: love, sacrifice, courage and community.” 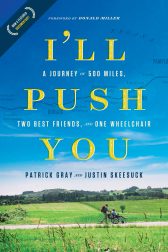