Format: 60 minute keynote presentation Attendees will gain: Get inspired & motivated to achieve more than ever in the next 12 months How to get “unstuck” & keep moving forward How to know if you are making the “right” ...

Format: 60 minute keynote presentation Attendees will gain: How ONE person can change an organization Gain deep insights into the habits of successful leaders Developing a high performance team built on trust & transparency ...

From an early age, your mind has been constantly programmed by messages of constraints, struggle and failure. These programmed messages hold you back from achieving the level of Success and Prosperity You Desire. Not anymore! In this motivational, ...

From an early age, your mind has been constantly programmed by messages of constraints, struggle and failure. These programmed messages hold you back from achieving the level of Success and Prosperity You Desire. Not anymore! In this motivational, high-content, business and life-changing experience, you will discover how to Reprogram Your Mind for Success and achievement acceleration! Kendal Netmaker helps leaders and organizations through the power of Shifting Your Mindset!

The Power of Your Story

This program is ideal for brands, organizations and sales professionals. This empowering message is ideal for any sales-focused group as it is sure to Ignite Your Audience while providing “real world” strategies for creating global impact! ...

This program is ideal for brands, organizations and sales professionals. This empowering message is ideal for any sales-focused group as it is sure to Ignite Your Audience while providing “real world” strategies for creating global impact! Kendal reveals his secrets that led him to grow his brand to dozens of retail locations and winning Entrepreneur of the Year four times. Kendal empowers audiences to use their story to take them the next level! Share Your Story. Change The World!

Entrepreneurs see the world differently than most leaders and organizations. Often they are forced to rely on themselves and keep changing their approach until they find a Winning Formula. What is it about the Entrepreneurial Mindset...

Entrepreneurs see the world differently than most leaders and organizations. Often they are forced to rely on themselves and keep changing their approach until they find a Winning Formula. What is it about the Entrepreneurial Mindset that helps these drivenpreneurs seize opportunity that others miss? A four-time entrepreneur of the year, Kendal Netmaker shows leaders and organizations how to embrace the creativity, grit, and vision of a startup and then channel this approach to drive growth, innovation, efficiency, and customer experience. Kendal Netmaker help leaders of any size company in any industry or profession Ignite The Entrepreneur Within!

Kendal Netmaker is one of Canada’s leading entrepreneurs and speakers, from Sweetgrass First Nation, SK. He was raised by a single mother who cared for Kendal and his three younger sisters while growing up in poverty and few chances for opportunity.

In grade 5, Kendal’s life changed forever when his best friend from South Africa helped him to play soccer by paying for his soccer fees and driving him to games/practices. This act of kindness opened up a whole other world for him that he would have never otherwise experienced. Two years later, when the family was relocating, they gave Kendal’s family their car; it was a life-changing gift that helped his mother access all kinds of basic necessities that had previously been difficult – and meant that Kendal and his sisters could now take part in after school sports.

The incredible generosity of his childhood friend’s family inspired Kendal to give back when he launched his company, Neechie Gear® – a lifestyle apparel brand that empowers youth through sports. A percentage of all Neechie Gear® profits go toward funding underprivileged youth to take part in sports. While finishing two degrees from the University of Saskatchewan, Kendal worked on growing the brand, which was founded out of Kendal’s small, one-bedroom apartment. After graduation, Kendal opened several stores while sharing his story as keynote speaker. The brand is now sold to consumers across North America through exclusive retail partners and online.

To date, Kendal has founded and invested in 5 businesses, the author of Driven To Succeed and won over 25 business awards, including runner-up at the YBI Global Entrepreneur of the Year. Kendal speaks professionally to thousands of people each year on resilience, leadership and the power of telling your story.

He lives with his wife and two children in Saskatoon, Saskatchewan, where he continues to run his company and provide mentoring and inspiration to others through his online training program, the Netmaker Academy.

Kendal is on a mission to empower entrepreneurs and leaders around the globe by demonstrating that regardless of where you come from and what you have gone through in your life, you have the power to enact change. Become who you were born to be!

“Kendal is an incredibly inspirational speaker. We had asked him to speak at our townhall of over 100 professional staff. The staff loved him and the positive messages he communicated. Fun, heartwarming yet challenging messages on how everyone can overcome any challenges they face, be successful and make a positive impact on the world around them. I would highly recommend him for any speaking engagement.”

“I had the opportunity to hear Kendal share his story at the NSBA small business week luncheon and it definitely got me thinking about my own story. His ability to focus on the positives and give back to others despite the challenges he has had to overcome is truly inspiring. Thank you Kendal for sharing your story and showing everyone that no matter who you are, or where you come from success can be attained through gratitude, relationships and following your passion!”

“I would highly recommend Kendal for any speaking engagements that you may require. His story, passion and purpose to inspire others is palpable. Kendal is a true entrepreneur, a professional, a friend that inspires you to be the best version of yourself. If your organization needs some inspiration and guidance, get Kendal to speak to them. They will be forever changed!”

“What a pleasure to have Kendal bring the keynote address at our Tourism Workplace Leadership Conference. He is a riveting story teller with a powerful message that motivates and uplifts. His wisdom exceeds his years and he leaves you feeling inspired to be a better version of yourself.” 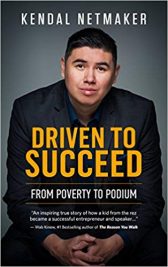