Are We Learning from Experience? Reclaiming Time to Think

The Essential Needs of Organizations Today: Trust, Responsibility, and Direction

Leadership and the New Science

Lessons from the New Workplace

Turning To One Another: Simple Conversations to Restore Hope to the Future

Courage, Conversation and Changing the World

Margaret Wheatley writes, teaches and speaks about how we can use our power and influence and willingly step forward to serve this troubling time. As things grow darker and more difficult, she summons us to reclaim leadership as a noble profession that creates possibility and humaneness in the midst of increasing fear and turmoil by creating Islands of Sanity.

Since 1973, Meg has taught, consulted, and advised an unusually broad variety of organizations: Her clients and audiences range from the head of the U.S. Army to twelve-­?year-­?old Girl Scouts, from CEOs and government ministers to small town ministers, from large universities to rural aboriginal villages. All of these organizations and people wrestle with a very difficult dilemma—how to maintain their integrity, motivation and effectiveness as they cope with the relentless upheavals and rapid shifts of today.

Meg has worked for 40+ years with leaders on all continents (except Antarctica) and with most types of organizations and communities. In her teachings and her new book, she feels compelled to challenge leaders with these questions: Who do we choose to be for this time? Do we contribute to the deterioration of human capacity by our silence and compliance, or do we act bravely and use our power and influence to champion the human spirit? Can we use the resources we have available to create islands of sanity wherever possible?

Since 1992, she has published nine award-­?winning books. Her newest book (June 2017) is Who Do We Choose To Be? Facing Reality| Claiming Leadership| Restoring Sanity. Using new science, history, and social critiques, she details where we are as a global culture, and the choices we have to make as leaders, summoning us to be Warriors for the Human Spirit. Her primary work since 2014 has been to train experienced leaders in the skills they need to stay present, discerning and compassionate in the midst of the difficult situations that all leaders now find themselves in.

Meg earned her doctorate in Organizational Behavior from Harvard University in 1979, and a masters in Media Ecology from New York University with Neil Postman (1972). She studied at University College London, U.K. and received a B.A. in History and Literature from the University of Rochester, N.Y. She has been a global citizen since her youth, serving in the Peace Corps in Korea in the 1960s. She began her career as a public school teacher, and also has been a professor in two graduate management programs (Brigham Young University and Cambridge College Massachusetts).

She is co-­?founder and President of The Berkana Institute, founded in 1991. Berkana has been a leader in experimenting with new organizational forms based on a coherent theory of how living systems adapt and change. Berkana has worked in partnership with a rich diversity of people around the world who strengthen their communities by working with the wisdom and wealth already present in their people, traditions and environment. These pioneers do not deny or flee from
our global crisis; they respond by moving courageously into the future now, experimenting with many different solutions Berkana’s most recent work is Warriors for the Human Spirit, programs for leaders from around the world who engage together, learning-­?in-­?community, training with discipline and dedication to develop a stable mind and skillful means.

In 2002, The American Society for Training and Development (ASTD) honored her for her contribution “to workplace learning and development” and dubbed her “a living legend.” In April 2005, she was elected to the Leonardo Da Vinci Society for the Study of Thinking for her contribution to the field of systems thinking. In 2010, she was appointed by the White House and the Secretary of the Interior to serve on the National Advisory Board of the National Parks System;
her primary responsibility is to support the growth of a 21st century culture of adaptation and innovation in 400+ national parks. She continues to serve on this Advisory Board and counts it as one of the most rewarding experiences of her life.

She returns from her frequent global travels to her home in the mountains of Utah and the true peace of wilderness. She has raised a large family now dispersed throughout the U.S. and is a very happy mother and grandmother, with 21 grandchildren and 3 great-­?grandchildren. 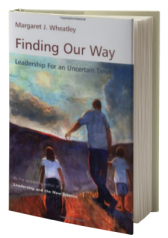