Unconscious Bias: How to Knock Down the Walls

I’m used to assumptions. I’ve dealt with them my entire life. It is hard for people to merge the two seemingly different versions of me: an outgoing and kind person who cares very much about others-with the counterterrorism and Middle East expert...

I’m used to assumptions. I’ve dealt with them my entire life. It is hard for people to merge the two seemingly different versions of me: an outgoing and kind person who cares very much about others-with the counterterrorism and Middle East expert. Most human beings are conditioned to associate a leader with someone who wields power in a more forceful manner. Those with sunny dispositions are often relegated to the second tier or the back row. This cognitive dissonance is a product of an Unconscious bias that sets our expectations of people’s strengths, weaknesses, personality and interests. Our assumptions are based on a lifetime’s worth of input, so this happens without our cognizance. We are not aware that this process is occurring.

Learn the first steps to knocking down the walls to unconscious bias and creating a culture of strong leaders:

What Dealing with Terrorists Taught Me About Business

In this program you will learn: How to build rapport using intelligence profiling secrets How to read body language to learn how others are experiencing you or the environment Learn to leverage a technique called “...

My Advantage as a Woman in the CIA

In this program you will learn: Use in-the-field techniques to turn challenging situations around so that you leave conversations in a positive way Leverage women’s intuition to gain an “unfair” advantage in high-stakes...

Going Undercover: Finding Your Purpose in a Dangerous World

God’s Looking for the Ordinary

Christian Persecution and the Roots of Terrorism

The Courage to Find Your Calling

How to Hear the Voice of God

Michele Rigby Assad began her career in the government relations department of an international relief and development organization in Washington, DC, in 1995. She joined the CIA in January 2002 to work as an intelligence officer in the Directorate of Operations, the covert arm of the agency. Specializing in counterterrorism and counterintelligence issues, Michele worked in Iraq and other secret Middle Eastern locations.

To date, Michele has lived in six countries in the Near East region and traveled to more than forty-five others. After a decade of government service, Michele left the undercover life to serve as a public speaker, author, trainer, and international security consultant focused on the Middle East, North Africa, and Europe.

Her book, Breaking Cover: My Secret Life in the CIA and What It Taught Me about What’s Worth Fighting For, published by Tyndale Momentum, was released February 2018 and is currently in production to be made into a major motion picture.

She and her husband, Joseph, live in Florida. Michele holds a master’s degree in contemporary Arab studies from Georgetown University’s School of Foreign Service and a political science degree from Palm Beach Atlantic University.

Michele credits student-led mission trips to Egypt, Russia, and Ukraine and a study abroad program in Egypt, Israel, and the West Bank as being the catalysts for her passion for foreign cultures and international travel. The year she spent studying in the Middle East changed the course of her life, taking her from rural central Florida to the front lines of the war on terror.

Michele is motivated to use her unique platform to educate and inspire, showing how critical courage is to live a life of impact and purpose. Michele writes about her many passions at www.michelerigbyassad.com, where she features articles on counterterrorism, personal security, the Middle East, faith, and inspiration. 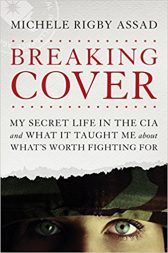