Pat Croce was featured on the cover of Inc. magazine as “The Dale Carnegie of the 21st Century.” He was named “Best Motivator” by Sales & Marketing Management magazine. And he graced the cover of Success...

Pat Croce was featured on the cover of Inc. magazine as “The Dale Carnegie of the 21st Century.” He was named “Best Motivator” by Sales & Marketing Management magazine. And he graced the cover of Success magazine with his empire-building secrets. Today Croce continues to fill weekly requests as a nationally renowned motivational speaker bringing audiences – from grade schools to Fortune 500 companies – to their feet.

Through his books, businesses, community initiatives, television appearances and motivational speaking engagements, Croce is determined to continue his mission to motivate the masses to reach their peak of potential and realize their dreams.

Pat Croce was always a fitness enthusiast, beginning in high school with his energetic involvement in gym class and participation in a variety of sports. He attended West Chester University (1972-1974) with a major in Health and Physical Education, ...

Pat Croce was always a fitness enthusiast, beginning in high school with his energetic involvement in gym class and participation in a variety of sports. He attended West Chester University (1972-1974) with a major in Health and Physical Education, and played defensive safety on the varsity football team. After two years, he transferred to the University of Pittsburgh to concurrently obtain a degree in Physical Therapy and certification in Athletic Training, making him one of the rare medical professionals with both degrees.

Upon graduation in 1977, Croce accepted the first physical therapy staff position he could find – at TriCounty Hospital in the suburbs of Philadelphia – but his heart was set on working for the NFL’s Philadelphia Eagles as the team’s physical therapist. Unfortunately his requests for employment – specifically, his offer to fill a position that did not exist – fell on deaf ears.

But the combination of Croce’s education coupled with his martial arts prowess (a 4th degree black belt in karate and an international champion) – as well as his drive, determination and entrepreneurial spirit – soon captured the attention of the Philadelphia Flyers hockey team. In 1980, he became the first physical conditioning coach in the NHL. Several years later, the Philadelphia 76’ers called on Croce to bring his physical therapy and conditioning magic to their team as well. The notoriety of healing famous professional athletes like Mike Schmidt, Julius Erving, Charles Barkley, and Bobby Clarke, brought Croce’s name and techniques into the living rooms of thousands of individuals who wanted to be trained just like the pros. In many ways, Croce created the concept of personal training before there was a name for the genre.

With the help of a dedicated, professional and fit staff, Croce built a physical therapy/fitness empire with his company Sports Physical Therapists – starting with one center in 1980 and expanding to 40 centers in 11 states in less than ten years. His empire expanded through his association with the 76ers and Flyers teams and his wildly popular fitness and nutrition segments on radio and television stations in Philadelphia through the 80’s, 90’s and beyond.

To this day, Croce cross-trains using a variety of strength, stretching and aerobic techniques, equipment and systems. Whereas most people require a daily java fix in the morning to jumpstart their day, Croce prefers an early morning endorphin injection via a pulse-raising, mind-stimulating workout.

Pat Croce compares his ability to focus his attention on numerous activities at once to that of a plate spinner. With a multitude of business endeavors, community initiatives, outdoor adventures, personal appearances, and family commitments on his ...

Pat Croce compares his ability to focus his attention on numerous activities at once to that of a plate spinner. With a multitude of business endeavors, community initiatives, outdoor adventures, personal appearances, and family commitments on his daily action plan, Croce evokes the ubiquitous variety-show entertainer who would wow audiences with his stack of plates and corresponding rods. The plate spinner would start by spinning one plate on the tip of a stationary vertical rod, and then repeat the process until he had up to a dozen disks spinning at the same time. The plate spinner would hustle back to the first plate, then the second, and so on, to ensure that no spinning plate would regress to a wobbly waver and subsequent fall. This amazing feat left an indelible metaphorical mark on Croce, as it demonstrated that you could successfully juggle a dozen “plates” simultaneously by maintaining equitable focus on each one, while never diverting your total focus for any prolonged period of time.

The plate spinner in Croce allows him to successfully focus his laser beam attention at any given time – on one of the companies he has funded, or on one of the charities he has committed to help, or on writing a speech for an appearance, or on attending a family function, or on continually improving his skills and talents (kaizen), or on acknowledging someone’s success with a hand-written note, or on many other endeavors – without ever abandoning any other plate he has begun to spin. He achieves this feat with a disciplined, organized, high-energy lifestyle that is grounded with the gracious support of his family, friends and staff. Croce believes life should be a bold and daring adventure. And his adventures in both his business and personal life have lived up to the billing.

Croce’s tools for dynamic success in all areas of life are available for all to learn, apply, and achieve. So what are you waiting for? Do it now!

Pat Croce’s Key Accomplishments Include . . . Pat Croce graced the cover of Success magazine as the first person to ascend from the training room to the boardroom of a professional sports team. Pat Croce’s remarkable success from his role as a physical therapist and pioneer in the sports medicine field, to the colorful leader responsible for the resurrection of the Philadelphia 76ers as an NBA championship contender, has been defined as one of the most amazing stories in sports history.

Through his business savvy, dynamic personality and emphasis on customer service, Pat Croce created Sports Physical Therapists; a sports medicine empire of 40 centers in 11 states, and built it into a top-ten finalist for the prestigious Malcolm Baldrige National Quality Award. Following the sale of his company in 1996, Pat Croce focused his entrepreneurial spirit and indestructible positive attitude on the purchase of the NBA’s last place team, the Philadelphia 76ers. During Pat Croce’s 5-year tenure as President, the team rose from worst to first in the NBA standings and broke franchise records in attendance, revenue, merchandise and consecutive wins on the way to the NBA Championships against the Los Angeles Lakers in 2001.

More About Pat Croce. . .
Pat Croce has also tackled television as a lively commentator for the NBA on NBC, as a Tae Kwon Do commentator for the 2004 Summer Olympic Games in Greece (Pat Croce is a 4th degree Black Belt) and during that same year, hosted the nationally syndicated daily TV show Pat Croce: Moving In for Sony Pictures Television. His most recent role was as a panel judge on ABC’s hit show American Inventor.

Pat Croce continues to fill requests as a nationally-renowned motivational speaker, and is the author of the New York Times bestseller, I Feel Great and You Will Too! the motivational tome, 110%, and the business book, Lead or Get Off the Pot! Pat Croce also authored two books that delve into his passion for pirates – Pirate Soul: A Swashbuckling Journey through the Golden Age of Pirates, and the children’s picture book, My Pop-Pop is a Pirate.

Pat Croce was the proud recipient of the “Entrepreneur of the Year” Award and was featured on the cover of Inc. magazine as “The Dale Carnegie of the 21st Century.” Pat Croce continues to thrive as a serial entrepreneur with controlling interests in the Pirate Soul Museum and the Rum Barrel Restaurant/Bar in Key West. He has a variety of investments in the fields of technology, e-commerce, fitness, healthcare, retail, real estate and entertainment. And most importantly, Pat Croce invests a huge chunk of his charismatic energy in a variety of community initiatives.

“Pat Croce’s presentation at the ‘Entrepreneur of the Year Awards’ was one of the highlights of the weekend. ‘Extremely inspiring,’ ‘The best I’ve heard in ten years attending the program,’ ‘An amazing speaker and truly motivating’ were just a few of the comments we received. The standing ovation you received was well-deserved and genuine. I don’t remember a standing ovation for any other speaker in the 16 years of the event!”

“It is rare that an outside speaker connects so well with the heart and minds of a group. Pat Croce and Colin Powell are the two best I have had the privilege of experiencing.”

“You will sense that the ‘learnings’ Pat Croce shares are really his ‘earnings.’ In other words, he earned these lessons, often the hard way. Moreover, he’s so authentic and so in touch with these processes of growth, that at times, you will feel you are overhearing his most intimate conversations.” 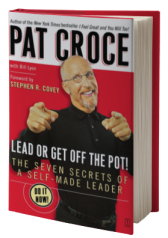