What it Really Takes to Succeed

Larry Winget is a six-times New York Times/Wall Street Journal bestselling author translated into over 20 languages. He is a member of the International Speaker Hall Of Fame. He has starred in his own television series and appeared in national television commercials. Larry is also regular contributor on many news shows on the topics of money, personal success, parenting and business. Larry is also the trademarked Pitbull of Personal Development®.

Some of Larry’s appearances are:

Larry’s SIX bestsellers, translated into over 20 languages, include:

And his newest book, Grow a Pair: How to Stop Being a Victim and Take Back Your Life, Your Business, and Your Sanity instantly hit both the WSJ and NYT best sellers list.

Larry is the best combination of credible content as backed up with his six bestselling books and over twenty years of experience speaking to nearly 400 of the Fortune 500 companies. He is known worldwide for being direct, caustic, irreverent, in-your-face and dead-on right! He offers solid advice for improving your life, business, finances and family. Not often do you find someone who can bring solid information delivered in such a humorous, thought-provoking, transformational style.

“Larry was absolutely amazing.  He had such an impact on the crowd, I can’t begin to put into words how good he was.  He delivered a wonderful message with some fantastic humor.  He had the entire room in tears throughout the presentation and it was exactly what we needed.  I would highly recommend him to any organization looking for a great motivational speak with a bit of edge.  He far exceeded my expectations and I could see us bringing him back again.  Thank you so much for the recommendation on Larry.  He was money well spent.”

“Finally a regular guy with some straight talk about what it takes to succeed in the real world.” 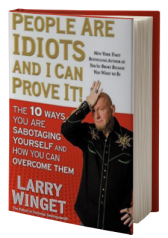 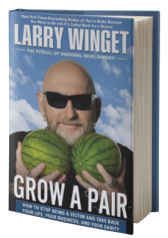