Megatrends 2020: Maximize the Opportunities of Social and Economic Change

Patricia Aburdene’s Megatrends 2020 presentation positions audiences to maximize opportunity with a firm grasp the social, economic, demographic and technological trends transforming our world. A customized blend of trends, selected with your audience in mind, will inspire ...

Patricia Aburdene’s Megatrends 2020 presentation positions audiences to maximize opportunity with a firm grasp the social, economic, demographic and technological trends transforming our world. A customized blend of trends, selected with your audience in mind, will inspire your organization to create a clear, competitive advantage. What are some of today’s most dynamic megatrends?

• The Future of Sustainability

• The demographics of the Millennials and Generation “Z”

• The New Economy of Human Intelligence

• The Internet of Things

The Competitive Advantage of Stakeholder Capitalism

Conscious Money: The Power of Human Values in Personal Finance

Innovation, Creativity, and Employee Engagement in the Next Economy

Patricia Aburdene is one of the world’s leading social forecasters, a best-selling author, and world-renown speaker. She co-authored the number one New York Times bestseller Megatrends 2000. Patricia was John Naisbitt’s collaborator on the publishing phenomenon Megatrends, which topped the charts in the U.S., Germany and Japan. Patricia’s landmark Megatrends 2010: The Rise of Conscious Capitalism launched a business revolution. Her most recent book, Conscious Money: Living, Working and Investing with Your Values for A Sustainable New Prosperity, was short-listed for the Books for A Better Life Award. With John Naisbitt, Patricia also co-wrote Re-inventing the Corporation and Megatrends for Women.

For 30 years, Patricia has lectured throughout the U.S., Canada, Europe, South America, Australia and the Pacific Rim for clients like Herman Miller, Harley-Davidson, Carrefour, Deloitte, Exxon, and the Management Institute of New Zealand. Clients include Adecco, the Professional Coach and Mentor Association, the Management Institute of New Zealand and the Consciousness In Business conference in Santa Fe, New Mexico.

Patricia’s journalism career began at Forbes magazine. She was a Public Policy Fellow at Radcliffe College in Cambridge, MA and holds a BA in philosophy from Newton College of the Sacred Heart (now Boston College), a MS in library science from Catholic University, and three honorary doctorates. After five years as a “Top 100 Thought Leader in Trustworthy Business” Patricia was awarded Trust Across America’s Life Time Achievement Award. She serves on the advisory board of the social equity firm Satori Capital, which specializes in Conscious Capitalist firms. Patricia lives in Boulder, CO and Gloucester, MA.

Megatrends 2010 is passionate and prescient

author of A Whole New Mind

Patricia Aburdene shows you how to capitalize on the trends transforming business. 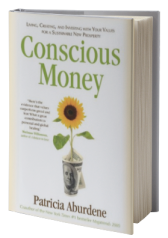