•  Riane Eisler’s presentations offer a whole new mindset that empowers us to meet our personal, social, and economic challenges. She keynotes national and international conferences and speaks at major corporations, universities, and NGOs. Other venues have ranged from the United Nations General Assembly and the U.S. State Department to invitations by heads of State.

•  Riane Eisler’s speeches change people’s lives, transform organizational cultures, and guide the direction of policies in more effective and sustainable directions. Drawing from her extensive cross-cultural and historical research, she shows that a better way of living and making a living are possible following the partnership way.

•  Eisler’s speeches ignite those “light bulb” personal and policy changes that empower women to become leaders and advance the transformation from domination to partnership. They offer practical ways to change lives and society, informing and inspiring.

The Real Wealth of Nations: Creating a Caring Economy

Eminent social scientist Riane Eisler shows that we can move to a more just and sustainable future. Eisler first captured world attention with her international bestseller The Chalice and the Blade: Our History, Our Future, which changed the way millions of people ...

Eminent social scientist Riane Eisler shows that we can move to a more just and sustainable future. Eisler first captured world attention with her international bestseller The Chalice and the Blade: Our History, Our Future, which changed the way millions of people view themselves and the world. Her most recent book, The Real Wealth of Nations: Creating a Caring Economics, shows that behind our most pressing personal and social problems lies the failure of present economic systems to value and support the most essential work of all: the work of caring for people and nature. Piercing the smokescreens of prevailing myths, she identifies foundations for a sustainable and equitable economy.

How often have you heard It’s just a women’s issue, and been outraged?  Eminent social scientist Riane Eisler shows that to move to a more just and sustainable future for all of us, this devaluation of women and anything stereotypically considered ...

How often have you heard It’s just a women’s issue, and been outraged?  Eminent social scientist Riane Eisler shows that to move to a more just and sustainable future for all of us, this devaluation of women and anything stereotypically considered feminine must be exposed and ended.  Drawing from both her international bestseller The Chalice and the Blade: Our History, Our Future, which has changed the lives of  millions of people around the world by showing that much that is considered new and radical – such as the international women’s movement – has ancient roots, and her most recent book, the groundbreaking The Real Wealth of Nations: Creating a Caring Economics, Eisler shows  the powerful influence of our hidden system of gendered values on our lives and the world’s policies. She outlines how we  can, and must,  lay foundations for a way of living and making a living that is sustainable, equitable, and truly meets human needs.

Riane Eisler has ignited the visions and actions of individuals and organizations worldwide. An award-winning author, renowned scholar, and dedicated social activist, Eisler has inspired people around the globe with her cultural transformation work that integrates ...

Riane Eisler has ignited the visions and actions of individuals and organizations worldwide. An award-winning author, renowned scholar, and dedicated social activist, Eisler has inspired people around the globe with her cultural transformation work that integrates the personal, political, economic, ecological, and spiritual. Eisler’s passion takes abstract-sounding words like “culture” and “leadership” and makes them catch fire. Drawing from three decades of research into the psychosocial dynamics of human behavior, her work shows that we can build environments that support our full human potentials. Eisler shows that we can each be leaders in creating a partnership-based worldview and society: a better organizational culture and a safer, saner world.

Riane Eisler’s Key Accomplishments Include . . . Riane Eisler’s story begins in Vienna, Austria, where as a small child she and her family had to flee from the Nazis. They emigrated to Cuba and eventually to the U.S. Riane Eisler has said that this trauma could have destroyed her, but instead, it led to her life-long quest to understand why horrible things like the Holocaust can happen – and what we can do so they do not happen again. Riane Eisler has become an eminent social scientist, attorney, author, and social activist. She is best known for her international bestseller The Chalice and The Blade: Our History, Our Future now in 23 languages. Renowned for her innovative perspectives on relationships, education, sex and spirituality, she addresses the need for a “more equitable and sustainable economic system” based on the “essential work of caring for people and nature.”

Riane Eisler’s book, The Real Wealth of Nations: Creating a Caring Economics– hailed by Archbishop Desmond Tutu as “a template for the better world we have been so urgently seeking,” by Peter Senge as “desperately needed,” by Gloria Steinem as “revolutionary,” and by Jane Goodall as “a call to action” – proposes a new approach to economics that gives visibility and value to the most essential human work: the work of caring for people and nature. Riane Eisler emphasizes that specific actions can change one’s life and help one to see in a new way because all change begins with the individual. Her work gives people grounded hope that change is possible and that we are not doomed to despair and destruction.

Riane Eisler has garnered powerful responses from very diverse groups around the world, as her common theme of caring helps people “connect the dots.” She is a sought after keynote speaker to conferences worldwide, and is a consultant to both business and government on applications of the partnership model introduced in her work. Riane Eisler’s international appearances have included: Germany at the invitation of the former President of the Bundestag (the German Parliament) as well as the Chair of Volkswagen International, Colombia at the invitation of the Mayor of Bogota and the Czech Republic at the invitation of Vaclav Havel, the former President.

More About Riane Eisler . . .
Riane Eisler’s other books include the award-winning The Power of Partnership and Tomorrow’s Children, as well as Sacred Pleasure, a daring reexamination of sexuality and spirituality, andWomen, Men and the Global Quality of Life, which statistically documents the key role of the status of women in a nation’s general quality of life.

Riane Eisler holds degrees in Sociology and Law from the University of California Los Angeles (UCLA). Ms. Eisler taught pioneering classes on women and the law at UCLA and is a founding member of the General Evolution Research Group (GERG), a fellow of the World Academy of Art and Science and World Business Academy, and a commissioner of the World Commission on Global Consciousness and Spirituality, along with the Dalai Lama and other spiritual leaders. Riane Eisler is also co-founder of the Spiritual Alliance to Stop Intimate Violence (SAIV). Ms. Eisler is president of the Center for Partnership Studies, dedicated to research and education.

Riane Eisler’s compassion for people has led her to pioneering work in human rights that has expanded the focus of international organizations to include the rights of women and children. Ms. Eisler’s research on systemic cultural transformation has impacted many fields, including history, sociology, economics, psychology, and education. Riane Eisler is the author of over 200 essays and articles in publications ranging from Behavioral Science, Futures, Political Psychology, and The UNESCO Courier to Brain and Mind, Yes!, the Human Rights Quarterly, The International Journal of Women’s Studies, and the World Encyclopedia of Peace.

Riane Eisler has been honored with the Humanist Pioneer Award and the first Alice Paul ERA Award. Riane Eisler is the only woman among twenty great thinkers, including Hegel, Adam Smith, Marx, and Toynbee, selected for inclusion in Macrohistory and Macrohistorians in recognition of the lasting importance of her work as a cultural historian and evolutionary theorist.

A true believer in great partnerships, Riane Eisler has been happily married for 30 years to the eminent social psychologist and author David Loye. Ms. Eisler attributes her clear head and vibrant health to daily walks, to all the love in her life, and to the excitement of joining with others to build a better future.

“When you gave that inspirational keynote address to our deans, vice presidents, and senior faculty, your talk sent more reverberations through our community than any speaker we’d ever had. You spoke from the heart, but also with such a depth and breadth of research data and sophisticated analysis at your finger tips, gently prodding us all to do better and better.”

“Riane Eisler spoke to the hearts and the heads of the top women at Microsoft. She was compelling not only in her compassion and humanity but even more so with her strong logic and sense of urgency. She is a wonderful, inspiring speaker!”

“When you keynoted the International Coaching Federation Conference you changed my life. Thank you ever so much, you made a profound change for me. Two things brought this about. Your storyteller technique is warm, personal, poignant and far reaching. I later decided to go into storytelling and I am still working at that, in your style. Your powerful message about the ideas and visions about the future for a partnership modeled world met my own thoughts about our presence in our world today.”

“I first heard Riane Eisler speak last year when she keynoted a meeting at the United Nations on global warming – and brought  the audience to its feet in response to her powerful insights about  our global challenges and what can be done to more effectively meet them.  In May of this year, I invited Dr. Eisler to keynote the CoNGO. Civil Society Development Forum 2010, and again she eloquently addressed delegates from around the world, influencing the Forum’s  Outcome Document. Dr. Eisler gives us a new conceptual framework  urgently needed at this critical time. Her contributions to humanity  truly embody insight, discovery, and practical works.”

President and Chief Executive, Conference of Non-Governmental Organizations in Consultative, Relationship with the United Nations (CoNGO) 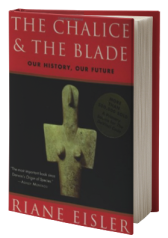 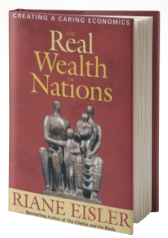