As CEO of Horrow Sports Ventures, Rick Horrow has been the architect of 100+ deals worth more than $20 billion in sports, performing arts, and other urban infrastructure projects.

Horrow pioneered the public/private partnership and infrastructure branding concepts that, to date, has enticed more than $4 billion in corporate funding to cities and development projects.  Besides developing stadia and arenas, Horrow’s ability to put together many urban initiatives into one package for voter approval has resulted in the building of new performing arts and convention centers, schools, libraries, transit projects, and tourist destinations—most recently, a quality of life development package approved by El Paso voters.

A popular speaker, writer and commentator on the business, law, and politics of sports, he is nicknamed “The Sports Professor” because he has been Visiting Expert on sports law at The Harvard Law School, where he received a law degree alongside Chief Justice of the Supreme Court John Roberts, his roommate.

Horrow is author of When The Game Is On The Line, an autobiographical examination of the people and politics behind mega sports deals, and co-author of Beyond the Scoreboard: An Insider’s Guide to the Business of Sport. In February, 2019, Human Kinetics will publish How to Get Ahead in Sport Business: Inside Advice on the Path to Success, edited by Horrow and containing insights from more than 100 sports industry leaders.

Internationally, Horrow has presented sports/facility development options for the governments of Trinidad and Tobago, St. Kitts, Brazil, Chile, Argentina, and on behalf of the United States Department of Commerce Business Development Center, World Tourism Organization, International Hotel Association, and the Multilateral Investment Guarantee Agency/World Bank. He has also worked for the province of Bahia (Brazil), the city of Victoria (Canada), and local entities in the Dominican Republic. 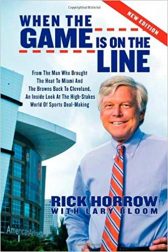 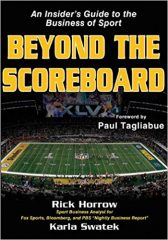