Peter Guber is a top business keynote speaker, storytelling expert, CEO of Mandalay Entertainment Group, owner of the Golden State Warriors, and the bestselling author of Tell to Win. His golden touch earned him a Best Picture Academy Award for Rain Man and helped the Warriors win multiple NBA Championships. Peter shares stories from his time in sports and entertainment to show how businesses can win.

Leaders in uncertain times cannot wait for a return to “normalcy.” This is not the moment to be risk averse. You must be an agent of change or you’ll soon find yourself and your organization in a permanent state of “dormancy.” Achieving success in today’s ...

Leaders in uncertain times cannot wait for a return to “normalcy.” This is not the moment to be risk averse. You must be an agent of change or you’ll soon find yourself and your organization in a permanent state of “dormancy.”

Achieving success in today’s high-consequence, highly uncertain, and rapidly-changing world requires that leaders be adept in living and acting out of their comfort zones. Organizations must keep a keen eye for incremental change, but leadership must look for exponential opportunities.

Through Peter Guber’s four decades of business experience across diverse industries, he’s organized certain F.A.C.T.S. that are crucial to leading and succeeding in uncertain times. Be motivated by a renowned leader who knows how to gain and sustain competitive advantage during times of uncertainty.

Tell to Win – The Power of the Purposeful Story

Stories are a misunderstood, misused, and underutilized asset in business. The ability to tell a purposeful story well can be a highly powerful  professional tool that can propel success for anyone in any industry. In this entertaining, enlightening and informative ...

Stories are a misunderstood, misused, and underutilized asset in business. The ability to tell a purposeful story well can be a highly powerful  professional tool that can propel success for anyone in any industry. In this entertaining, enlightening and informative presentation, “StoryMan” Peter Guber shares his methodology of how to employ purposeful storytelling to sell more products/services, rebrand your product or company, lead more persuasively, manage more effectively, inspire greater creativity, and foster deeper collaboration.

What is the secret sauce behind… Turning an NBA franchise from worst to first and winning 3 championships in 4 years? ...

What is the secret sauce behind…

Rich in stories spanning his vast career as a successful executive and entrepreneur, Guber reveals three core navigational stakes critical to define, design, create, and implement a winning team: a robust culture, a tolerance for risk, and the ability for every member to articulate the promise, process and product.

Peter Guber is operating Owner of the 2015, 2017 and 2018 NBA Champion Golden State Warriors, an Owner of the five-time National League West Champion, Los Angeles Dodgers, and an Owner and Executive Chairman of Major League Soccer’s Los Angeles Football Club (LAFC). Peter Guber is Co-Executive Chairman of aXiomatic, a broad-based esports and gaming company which owns Team Liquid, a premier esports team. Peter Guber is a Regent of the University of California and has been a professor at UCLA for 40 years.

Peter Guber is a noted author with works including Shootout: Surviving Fame and (Mis)Fortune in Hollywood, which became a 7-year television series on AMC which he hosted. He wrote the cover article for the Harvard Business Review titled, The Four Truths of the Storyteller. His most recent business book, Tell To Win – Connect, Persuade, and Triumph with the Hidden Power of Story, became an instant #1 New York Times bestseller.

“The JP Morgan clients have not stopped talking about you!  They just loved their evening at Paramount with your riveting talk.  We used many of your points the next day during our presentations.  Thank you for your time, your energy and your wisdom – we were blessed with all three.”

“The reviews are in!  You were the hit of the conference – we just got the evaluation results back, and you were the highest rated speaker.  It was delightful to be with you – really MAGIC!”

“Absolutely fantastic!  Anyone at any level will learn how to raise their game through Peter’s MAGIC methodology.”

former CEO and Chairman of Warner Bros. and Yahoo!

“You will leave his keynote a better story teller and a stronger, more effective business person.”

“I wanted to thank you for contributing to the success of our Senior Leadership meeting here at Cisco last week. I am pleased to say that your score placed you in the top 3 of all presenters (over 30 presenters) at the event. Great job.”

“Peter Guber was amazing – a wonderful way to begin our conference!  Everyone enjoyed him tremendously, and we’ve received a lot of positive feedback about his presentation and his humor!”

“Anyone seeking to become stronger leaders will benefit from Peter Guber’s unique expertise in the art, craft and magic of story.”

Distinguished Professor, USC & Author of “On Becoming A Leader” 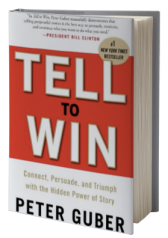 Entrepreneur expert and keynote speaker Peter Guber was lauded as part of the investment team that helped make the NBA...

Peter Guber Shows the Power of Storytelling in Business Success

When it comes to success in business, Peter Guber believes storytelling is key. With a resume spanning decades, Guber has...

Lessons on Building Your Company Through Storytelling From Peter Guber

Does Your March Madness Bracket Hold Up to AI

Now that your brackets are locked in with the Louisville/Minnesota tip-off, it’s time we tell you who’s actually going to...

The Dodgers, The Golden State Warriors, Los Angeles Football Club—what do they all have in common? Peter Guber is at...

What do the Golden State Warriors, Los Angeles Dodgers, and online esports Team Liquid all have in common? If you...

Dodgers Are Looking for Redemption in 2018 World Series

The Los Angeles Dodgers made it to the World Series Championships to fight for redemption after last year’s near win....

For the third time in four years, Peter Guber and Joe Lacob’s Golden State Warriors celebrated their NBA Championship at...