Founder of F-Secure corporation and Former Chairman of Nokia Corporation

Transforming Nokia: The Power of Paranoid Optimism to Lead Through Colossal Change

Risto Siilasmaa is the former Chairman of the Board of Directors of Nokia Corporation.  He joined the Nokia Board in 2008 and became Chairman of the Board in May 2012. As Chairman he led Nokia through its transformation from an ailing devices company to a successful network infrastructure player through the divestiture of the Nokia device business to Microsoft and the acquisition of Nokia Siemens Networks and the acquisition of Alcatel-Lucent.

Mr. Siilasmaa has received several awards including Nordic Chairman of the year 2009, the Most Influential IT Leader 2007, The Leader of the Decade 2003 and Innovation Luminary Award 2015 granted by EU Open Innovation Strategy and Policy Group.

Mr. Siilasmaa holds a Master of Science degree from the Helsinki University of Technology and he was awarded Honorary Doctorate in Technology by Aalto University schools of technology in 2018.

Nokia’s turnaround is one of the most dramatic corporate transformations in modern history. In 2012, the once almighty market leader in mobile devices was rapidly running out of cash. Most investors had written it off altogether. Yet Nokia managed to defy the odds and, under Risto’s chairmanship, is now at the forefront of network technology. This first-hand account reads like a thriller, with behind-thescenes descriptions of the company’s collapse, the courageous decision to shift direction and Nokia’s astonishing reinvention.

Along the way, Risto shares survival strategies and change-management methods he learned by leading through crisis. He explains how the power of paranoid optimism and the precepts of “Entrepreneurial Leadership” build sustainable success. His thoughtful reflections provide tangible lessons for any leader, and his leadership principles apply in both good and tough times.

Real leadership lessons aren’t taught in class; they’re learned under fire. In Transforming Nokia, Risto Siilasmaa vividly recounts how he and his team took an iconic company on the brink of collapse and brought it back to be a global leader in a new industry. It’s a remarkable tale, rich with hard-won, practical insights on crisis management, restoring trust, the centrality of culture—and the power of “paranoid optimism. 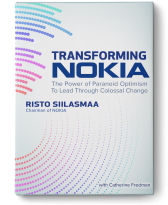