Historically, health care delivery has tended to be transactional and unidirectional-in other words one doctor-one hospital stay-one insurance bill. Now in a post reform world all bets are off. It requires a different kind of thinking when we begin to take a risk(read premium ...

Historically, health care delivery has tended to be transactional and unidirectional-in other words one doctor-one hospital stay-one insurance bill. Now in a post reform world all bets are off. It requires a different kind of thinking when we begin to take a risk(read premium dollar) for the total care of a patient population. A different approach when we have to accept a single payment for an episode of care and then split that payment among several providers. In that environment we must be much shrewder and have a different approach with the other stakeholders. We certainly need to understand why health care seems to defy our best thinking about how to change it and what policy alternatives give us the best hope of survival. In this keynote, Stan Hupfeld invites leaders to hear his somewhat provocative thoughts that will stimulate discussion and encourage leaders to think outside the box as never before!

Surviving In a Post Reform World..It Isn't Rocket Science-But We May Need Spock!

Using the “Spock theme” with slides and video, Stan Hupfeld is able to emphasize the lack of logic in the post reform world. In today’s health care world the only voices that seem to carry any weight are the ideologues of both political persuasions. Absent ...

Using the “Spock theme” with slides and video, Stan Hupfeld is able to emphasize the lack of logic in the post reform world. In today’s health care world the only voices that seem to carry any weight are the ideologues of both political persuasions. Absent are the cold hard facts of medical care delivery and organizing as witnessed and experienced by medical providers.

Stan takes the approach through our friend, Spock, who was always amused by our tendency to let our emotions and our vested interest govern our reaction to any intense personal experience. While reforming health care is admittedly complex it does not measure up to the complexities experienced by social scientists in other areas.

Stan calls on our friend Spock, and delivers how he would advise the reformation of our health system. Using only Vulcan logic how would he recommend mere mortals devise a system consistent with the resources available, and the limitations of human science to best meet the needs of the American public.

The necessary ingredients that seem to be missing from the reform debate are logic and facts. Perhaps a trip on the Starship Enterprise to recapture the spirit of the half human/half Vulcan Spock and to divorce ourselves from illogical partisan politics is the only way to make substantial progress on a complex problem filled with emotion.

This keynote begins with a discussion of what drives our current system, including:
– Money
– Prestige
– Culture
– Litigation

Stan continues with the dilemmas of our current situation:
– Does money give us rights or advantages over others?
– Healthcare – Is it a right or privilege?
– Is it a business or a social service?

Aging is Not for the Faint of Heart!

In preparing for this keynote, Stan Hupfeld talked with a number of people and most agreed they would like to live into their 90’s in relatively good health with all their mental faculties, excited to get up every morning, able to contribute to some cause, relevant to ...

In preparing for this keynote, Stan Hupfeld talked with a number of people and most agreed they would like to live into their 90’s in relatively good health with all their mental faculties, excited to get up every morning, able to contribute to some cause, relevant to someone or some thing, and then depart quietly in their sleep. We all know people who have achieved these goals, but unfortunately there are many more whose life ended in a nursing home or a memory unit.

Stan likes to quote the old saying, “The rest of the world views death as inevitable…Americans view it as optional.” While a bit overdone, he remarks there is some truth in this comment. It is a well-known fact that, as Americans, we spend an extraordinary amount of money on healthcare in the final months of our lives. It has been estimated that one-half of our lifetime health expenditures will be spent in the last six months of our lives. As a culture, our inability to deal with death logically exacerbates cost problems and limits our ability to have a serious discussion about end-of-life issues.

He strongly believes we simply have to get the dying thing right. Medicare now spends 25 percent of its budget on care delivered in the last year of the beneficiary’s life. Of that, 40 percent is spent during the last 30 days. Decisions are routinely made that have nothing to do with dying with dignity, to say nothing of the costs incurred by an already negative balance sheet.

Invite Stan to create an environment based in love and compassion for the elderly – and a discussion about end-of-life decisions directed by healthcare professionals, family and community, rather than being a wedge in the next election cycle.

A customized program will be delivered focusing on questions such as:
• What do we want our lives to look like as we age?
• What would be the ultimate end game as we approach the last quarter of our lives?
• What can be done to bridge the gap?
• What are clever ways to keep seniors engaged, relevant, and productive members of society?
• What about tax incentives for the elderly to encourage them to volunteer their expertise and professional services?
• How do other countries handle aging and end-of-life?
• Why the disconnect between other county’s views of aging and what transpires in this country?
• He invites additional questions that are of interest to the audience.

Stanley Hupfeld is the author of “Political Malpractice, How The Politicians Made A Mess of Health Reform.” In his book, as on the platform, he talks about The Patient Protection and Affordable Care Act-or ‘Obamacare’ as its opponents derisively refer to it-is it either the greatest piece of social legislation in the history of the United States or it is an abomination inflicted on the American public that will ultimately destroy our health system? As an insider, Stan dissects that health system and exposes the fallacies and prejudices of both political parties. He explains that, if we are willing to make hard choices, we can indeed cover the uninsured, control costs, and not bankrupt the country.

In July 1, 1995, Stan became President and Chief Executive Officer of INTEGRIS Health, an integrated delivery system composed of INTEGRIS Baptist Medical Center, INTEGRIS Southwest Medical Center, and INTEGRIS Rural Health. The System comprises 13 hospitals, all in Oklahoma. Annual net revenues of the System are over $l.3 billion with 1600 beds. He was President and Chief Executive Officer of Oklahoma Healthcare Corporation and Baptist Medical Center of Oklahoma from March 1987 to that time. Effective January 1, 2010 he transitioned to Chairman of the INTEGRIS Family of Foundations, and is currently Senior Consultant.

He has spoken and been published widely, and was honored as CEO Marketer of the Year by the American Society for Healthcare Planning and Marketing, and as Executive of the Year by the Sales & Marketing Executives International. He is the 2003 recipient of the W. Cleveland Rodgers Distinguished Service Award for outstanding service to the health care industry. Stan was honored in 2007 with one of the American Hospital Association’s highest honors, The Award of Honor, and is also the recipient of the Friends of Nursing Award from the Oklahoma Nurses Association.

As the driving force of the nation’s first hospital-sponsored charter school, Stan was honored in 2009 when the INTEGRIS Health Board of Directors voted to rename the school The Stanley Hupfeld Academy at Western Village. He currently writes a healthcare column for a local business daily, The Journal Record.

Stan is a native of Dallas, Texas, with an undergraduate degree in History from the University of Texas in Austin, and a Masters of Science in Healthcare Administration from Trinity University. He has been honored by Trinity University as an outstanding graduate. He served as an Administrative Resident at Providence Hospital in El Paso, Texas and subsequently was the first lay-President of St. Joseph Hospital of El Paso, Texas (1973-1977). 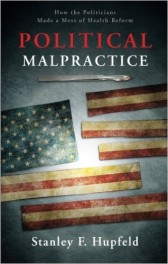