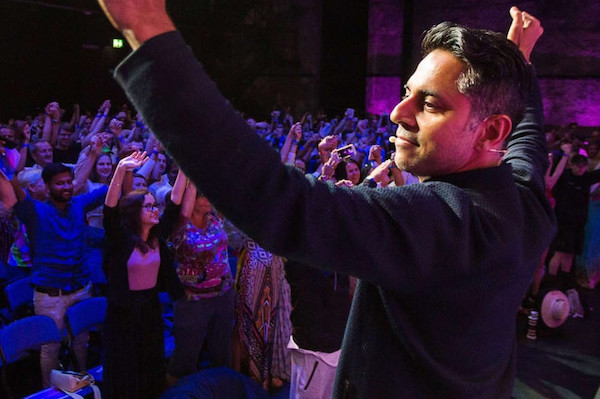 In 2008, keynote speaker Vishen Lakhiani, founder of Mindvalley, had a problem. Even though he had founded Mindvalley in 2003 (now one of the top online learning platforms in the world), he was still a struggling meditation teacher, barely eking out a living in Malaysia. That’s when a chance encounter with a top thought leader led him to dream bigger.

After that insightful moment, Vishen never taught a meditation class again. In 2010, he started A-Fest, the festival that connects “change-makers and visionaries who are driven by epic ideas to impact the world.” However, things really changed when he started to question the rules (or brules as Vishen calls them) and began living by his values.

By dreaming bigger and following values, Mindvalley’s revenue increased by 50% for three years in a row. Then in 2016, Vishen brought this same philosophy to the world with The Code of the Extraordinary Mind, which became a New York Times bestseller.

Here are two ideas from Vishen’s book to get you started on your own journey.

We all live by brules even though we don’t know it. Brules are “bullshit rules,” according to Vishen. These brules are based on what we think society wants from us. Brules follow the do/be mechanism. We must do something in order to be something. For example: We must buy a house with a two-car garage to be successful or we must have a big title on our business card to be a leader. Following the brules leads to anxiety and dissatisfaction because how we live is not based on what we personally value.

Instead, we all need to flip the order of how we approach life. Vishen says we need to be in order to do. For example, being happy leads to doing things with joy. Being patient allows us time to do things well. Start from a place of being and doing things will follow naturally. Research in happiness also confirms this. People who are happier are more healthy and successful.

The reason why many of us don’t achieve more success in our careers or create anything extraordinary is we play it small and safe. When you play small, you only achieve small things. When you play it safe, you never risk failure nor achieve anything great.

However, when you set bigger goals, just beyond your current capabilities, you achieve bigger things. Once you dream bigger, Vishen says, you will find you don’t need to be motivated or pushed by anyone. Your vision will pull you. People will be drawn to you and your goals.

For many people, Vishen says, these goals are possible when we feel our world is safe. When we feel safe and secure, we give ourselves the freedom to try bigger things because it’s okay to fail. In fact, Vishen suggests businesses set a few goals in which failure is 50% likely. Then you know you are aiming big.

So if you want to lead a happier and more rewarding life, stop following the brules and dream bigger. You might be surprised at what happens. If you are interested in learning more about keynote speaker Vishen’s ideas, check out his talks on YouTube, read his book, or book him for your next event.