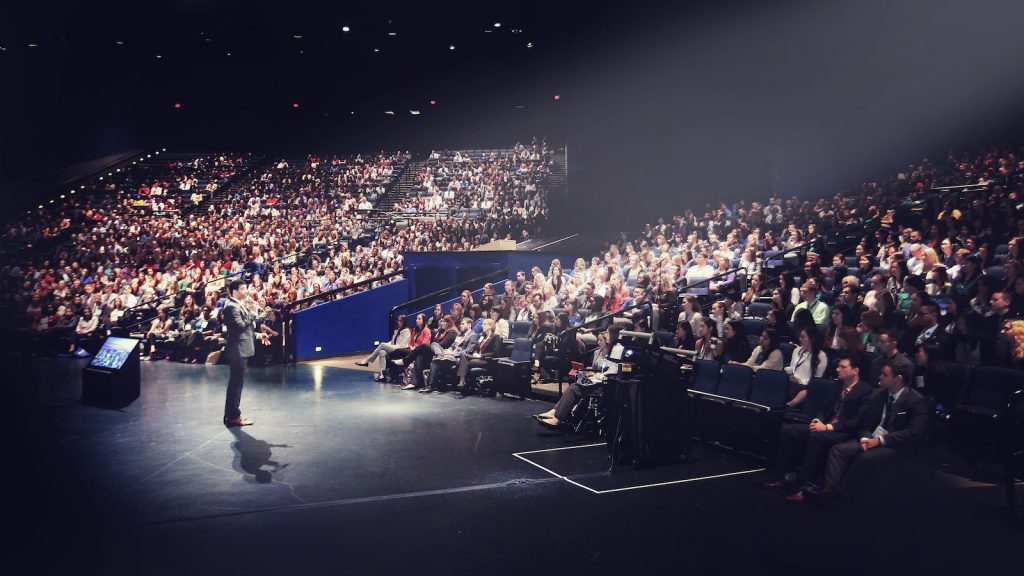 Famous Motivational Speakers are athletes, entertainers, business owners, and bestselling authors who are well known for their talent and success but also have a motivational message to tell about how they overcame adversity to reach their full potential. Try one of the top eleven famous motivational speakers in 2019 for your next event or keynote.

Magic Johnson is known for his 13-year professional basketball career with the L.A. Lakers, including 12 NBA All-Star games and an Olympic gold medal win. After retiring from professional basketball, Magic became a leading spokesperson for HIV education and a motivational speaker. Johnson delivers a passionate message about his life story, what motivated him, and how we can all make a difference in our community.

Molly Bloom is an inspirational speaker, bestselling author of Molly’s Game, and was the business mind behind the most exclusive, high-stakes poker game in the world. Her story covers everything from starting her business knowing nothing about poker to losing everything—then overcoming addiction and rebuilding her life.

Brad Montague is a storytelling expert and inspirational speaker famous for co-creating the “Kid President” viral videos in 2013. In his talks, Brad shares stories of how his small, funny video became a hit and the life lessons he learned from the experience.

Mel Robbins is best known for her TEDxTalk “How To Stop Screwing Yourself Over.” She is a powerful motivational keynote speaker who shares the story of overcoming her depression and turning her life around with “the five-second rule.” Mel helps break the habit of procrastination and self-doubt so you can become a more confident and productive individual.

Daymond John is a motivational speaker, founder of FUBU clothing, and reality TV investor on Shark Tank. Daymond shares his inspirational story of overcoming tough times to grow FUBU clothing from a garage startup to a multi-million dollar company.

Dr. Brené Brown is a motivational speaker and emotional intelligence expert, famous for her TEDx talk “The Power of Vulnerability” (one of the top 5 TED talks in the world) and her Netflix special The Call to Courage. Brené inspires audiences with her story of learning to embrace vulnerability and shows how others can do the same.

Abby came to fame as the co-captain of the 2015 U.S. Women’s World Cup Champion Team and as a two-time Olympic medalist. She inspires audiences with her talks on commitment, resilience, excellence, and sisterhood.

Bert Jacobs along with his brother John Jacobs created the Life is Good t-shirt company, originally selling t-shirts from their van. Neither one had a background in business at the start but their company took off, becoming a huge success. Despite making countless mistakes along the way, they learned how to use optimism to stay on top.

Dr. Michio Kaku is one of the most widely recognized people in science today, appearing on international TV and radio for his unique insights. His talks on the future of the mind inspire audiences everywhere.

Bethany Hamilton was a rising teenage surfing sensation when she lost her arm to a 14-foot tiger shark. But one month after the attack, Bethany returned to the water and just over a year later she won her first national title. Bethany’s comeback story has been told as theNew York Times bestselling autobiography, Soul Surfer, and the 2011 film with the same title.

The originator of the Chicken Soup for the Soul series and a prolific self-development author, Jack is recognized as America’s number one motivational speaker. Jack inspires audiences to participate more fully in life, show more compassion, dream bigger, and persevere in the face of setbacks.

Bring one of these famous motivational speakers to your next event; they are sure to add a touch of cachet and inspire your audience to reach new heights.

Peter Guber is the Founder, Chairman, and CEO of Mandalay Entertainment Group, and the owner of the Golden State Warriors and the L.A. Dodgers. He is also the author of the #1 New York Times Bestselling book “Tell to Win” and a professor at UCLA. Guber has transformed each company he’s been a part of. His management is credited with overhauling the Warriors and had a significant part in their Championship wins in 2015 and 2017.

Bethany Hamilton is a source of inspiration to millions of people through her story of determination, faith, and hope. During a surf in 2003, Bethany was attacked by a 14-foot tiger shark, which bit off her left arm. But one month after the attack, Bethany returned to the water and just over a year later she won her first national title. Bethany’s story has been told in the New York Times bestselling autobiography, Soul Surfer, and in the 2011 film with the same title. She is also involved in numerous charitable efforts, including her own foundation, Friends of Bethany, which reaches out to encourage amputees and youth by offering hope to overcome through Christian faith.

Known for his 13-year professional basketball career, which includes 12 NBA All-Star games, an Olympic gold medal win, Earvin “Magic” Johnson is also one of the most requested motivational speakers. After retiring from professional basketball, Magic turned his interest towards entrepreneurship and became a leading spokesperson for HIV education. He also established the Magic Johnson Development Corporation, which builds commercial property in long-neglected minority urban and suburban neighborhoods. As a famous motivational speaker, Johnson delivers a passionate message about his life story, what motivated him,  and how we can all make a difference in our community.

Les Brown is an internationally recognized speaker and one of the nation’s leading authorities in understanding and stimulating human potential. As a famous motivational speaker, author and television personality, Les Brown has risen to national prominence by delivering a high energy message, teaching audiences how to shake off mediocrity and live up to their greatness. It is a message Les Brown has learned from his own life and one he is helping others apply to their lives.

Jon Dorenbos is a former NFL player with the Philadelphia Eagles and current magician and famous motivational speaker. When Jon Dorenbos is on stage, he emphasizes, through his unbelievable magic tricks, the importance of choice and openly shares his childhood tragedy. When he was twelve, his family was torn apart after his father murdered his mother. Jon chose to rise through adversity by setting goals, no matter how high, and taking the necessary steps to accomplish these goals. He started learning magic at the age of twelve and is now considered a “master magician”, earning the respect of top magicians everywhere including casinos in Las Vegas. Most recently, Jon “wowed” America with his performance on NBC’s America’s Got Talent. Jon made it to the finals and placed third amongst tens of thousands of competitors.

Tracee Ellis Ross, actress, performance artist, and famous motivational speaker is the star of the new ABC comedy series Black-ish. She is also known for her role on the show Girlfriends which ran for eight seasons and as the daughter of famous singer Diana Ross. Ross is a dedicated and passionate motivational speaker. She teaches a workshop called Tapping Into Your Creative Well which encourages people to discover and utilize their inner joy to keep their lives on course. She is also a committed volunteer intent on making a difference in the lives of teenage girls. She works closely with Aviva Family and Children Services in Los Angeles and The Big Brother Big Sister Program, where she has held self-esteem workshops nationwide.

The originator of the Chicken Soup for the Soul series, and a prolific self-development author, Jack is recognized as America’s number one motivational speaker. From Jack’s motivational keynote audiences will be inspired to participate more fully in life, show more compassion and caring in their professional relationships, dream bigger, replace blaming and complaining with responsibility, and how to persevere in the face of fear, obstacles, and setbacks. A keynote presentation from motivational speaker Jack Canfield is a once and a lifetime experience not to be missed.

Jennifer Arnold is a pediatrician and neonatologist and the Medical Director at Texas Children’s Hospital. She is also that co-star of TLC’s Little Couple and a cancer survivor. She is an advocate for spreading cancer awareness, supporting those on the road to recovery, and engaging others with her motivational story of survival. A famous motivational speaker, Jennifer has spoken at events for the March of Dimes and at the Texas Conference for Women.

The Iron Cowboy Explains The Right Mindset for Success

Use Backward Thinking to Propel Your Ideas Forward