Amory Lovins’ Key Accomplishments Include . . .
Amory Lovins, a MacArthur Fellow and consultant physicist, is among the world’s leading innovators in energy and its links with resources, security, development and the environment. He has advised energy and many other industries for more than three decades, as well as the U.S. Departments of Energy and Defense. A former Oxford don, Amory Lovins advises major firms and governments worldwide and has briefed 19 heads of state.

Amory Lovins’ work focuses on transforming hydrocarbon, automobile, real estate, electricity, water, semiconductor, and several other sectors toward advanced resource productivity. Amory Lovins co-founded and is Chairman and Chief Scientist of Rocky Mountain Institute, an independent, market-oriented, entrepreneurial, nonprofit, nonpartisan think-and-do tank, that creates abundance by design. RMI has served or been invited by more than 80 Fortune 500 firms, redesigning more than $30 billion worth of facilities in 29 sectors, with much of its path-finding work involving advanced resource productivity (typically with expanding returns to investment) and innovative business strategies.

Amory Lovins has held several visiting academic chairs, most recently as MAP/Ming Professor in Stanford’s School of Engineering, offering the university’s first course on advanced energy efficiency. He has also authored or co-authored hundreds of papers and twenty-nine books including: Small Is Profitable: The Hidden Economic Benefits of Making Electrical Resources the Right Size – an Economist “book of the year” blending financial economics with electrical engineering, and the Pentagon co-sponsored Winning the Oil Endgame, a roadmap for eliminating U.S. oil use by the 2040s, led by business for profit.

The Wall Street Journal named Amory Lovins one of thirty-nine people worldwide “most likely to change the course of business.” Newsweek has praised him as “one of the Western world’s most influential energy thinkers” and Car magazine ranked him the “twenty-second most powerful person in the global automotive industry.” 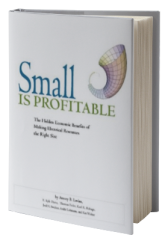 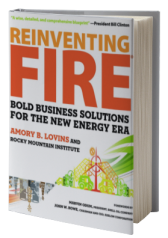