Barbara Res is an expert and keynote speaker on sexual harassment where she has partly gained this knowledge from working in male-dominated fields and corporations. Res served for many years as the Executive Vice President for the Trump Organization’s development and is often known as “The Woman Who Built Trump Tower.”

Working with the President of the United States

An insider’s perspective on how Trump thinks; what to expect from Donald Trump’s former Executive Vice President for Construction and Development based upon her 18 years working for him. Barbara Res was the original Apprentice. A Female Pioneer in Engineering and ...

An insider’s perspective on how Trump thinks; what to expect from Donald Trump’s former Executive Vice President for Construction and Development based upon her 18 years working for him. Barbara Res was the original Apprentice. A Female Pioneer in Engineering and Construction.

Women in Non Traditional Roles: History and Current Status with Keys for Success

In this talk, Res discusses how to attract and keep female workers and how diversity can positively affect your business.

The Woman Who Built Trump Tower

A Female Pioneer in Engineering and Construction

Barbara A. Res was the original Apprentice having been tapped by Donald Trump and his wife, Ivana, to oversee the construction  of his iconic Trump Tower on 5th Ave in New York City.  He discovered her working as a construction engineer and superintendent on the Grand Hyatt Hotel, recognized as Trump’s entrée into the Development Business.  Her no-nonsense attitude and her ability to stand up to the men including Trump himself attracted his attention.  Res presents a nuanced view

Res is an expert on dealing with Sexual Harassment.  Always the only  woman, whether in engineering school or on the site, she was discriminated against, harassed and intimidated.  Her positive attitude and perseverance enabled her to overcome the obstacles and achieve success in a field that is still mostly closed to women.  Res talks about her experiences in the times before the law protected women and how things have changed yet remained the same.  She inspires, informs and amuses with her stories of working men and millionaires.  Res believes that work does not define the individual and that women can succeed in any field.

Res has worked in construction and development across the country and in Europe for almost 40 years. She has held virtually every position in contracting and has been a development executive responsible for bringing projects from raw land through occupancy.  She has advocated before municipalities, legislative bodies, state and federal agencies and before the business and local community.  She is a licensed attorney and an effective mediator and arbitrator.  She talks about the interaction between Developers and contractors, professionals, the government and the community with tips to enhance  these relationships to maximize results.

Res has appeared in interviews on CBS, PBS, MSNBC, RNN, NY1 and CNN and in documentaries the world over, including Netflix “Dirty Money” and BBC’s “American Dream.  She has written extensively about sexual harassment, women in construction and her relationship with Donald Trump.  She has lectured at NYU School of Continuing Education and the New School.  She is the recipient of CCNY’s Prestigious Townsend Harris Medal, and Pofessional Women in Constructions’s Emily Roebling Warren Leadership Award   Barbara Res is the author of All Alone on the 68th Floor: How One Woman Changed the Face of Construction.  A native of New York City, she now resides in Tenafly, New Jersey.

Some  of  her appearances include:

Procure – GROUNDBREAK- 2017 Austin, Texas  women in construction panel and speaking alone on the relationship between  builders and contractors

Barbara Res recently spoke to over 450 attendees at the 2019 Women in Construction Conference (WIC) held in Newport Beach, CA. Barbara absolutely hit a home run with the audience and she added a personal feel to her presentation that the entire group could relate to. The audience said they could have listened to Barbara for another hour if time permitted. The entire audience was very captivated by her message and more importantly how she delivered it with such passion. Barbara’s book will be selling quickly with this group. 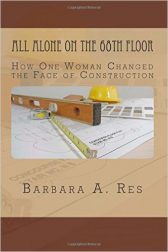