A Pulitzer Prize-winning columnist and author of more than 30 books, over a dozen of which were best-sellers, Dave Barry delivers a uniquely funny, insightful and enlightening view of relationships, work, kids, technology and life.

His critically acclaimed column appeared in hundreds of newspapers nationwide for more than 15 years, and he has been one of the country’s most beloved humorists for over two decades.

The Wit and Wisdom of Dave Barry

Barry brings his hilarious sense of humor to your stage and offers up his wacky point of view on relationships, work, kids, technology, and life in general.

For many years he wrote a newspaper column that appeared in more than 500 newspapers and generated thousands of letters from readers who thought he should be fired. Despite this, Barry won the Pulitzer Prize for commentary, although he misplaced it for several years, which is why his wife now keeps it in a secure location that he does not know about. One of Barry’s columns was largely responsible for the movement to observe International Talk Like a Pirate Day every year on September 19. This is probably his most enduring achievement.

Barry has written more than 30 books, including the novels Big Trouble, Lunatics, Tricky Business and, most recently, Insane City. He has also written a number of books with titles like I’ll Mature When I’m Dead, which are technically classified as nonfiction, although they contain numerous lies. Two of Barry’s books were the basis for the CBS sitcom Dave’s World, which can probably still be seen on cable TV in certain underdeveloped nations.

Barry lives in Miami with his family and a dog that is determined to urinate on every square inch of North America.

He was terrific, a phenomenal speaker, and easy to work with. A++!

Dave was fantastic as usual – a crowd favorite!

He was one of the best speakers we have ever had! What a true treat.

Dave Barry was a great hit! He had people laughing so hard it hurt.

Dave Barry was great! He had the crowd in stitches the whole time! 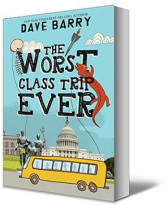 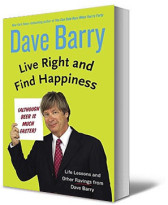