Clean Brexit; Why a clean Brexit would be best for the new Global Britain

Dr. Gerard Lyons is one of the UK’s leading economists. He played a leading role in the UK Referendum Campaign, being a co-founder of Economists for Brexit. As a leading City economist and a former board member of The CityUK, he felt strongly that Brexit would be beneficial, in the long-run, for the UK financial sector, as well as for the economy. In January this year he co-authored a paper called Clean Brexit, released in advance of the Prime Minister’s Lancaster House speech where she laid out the government’s Brexit policy. Two days ahead of the PM’s speech, the main story in Sunday Times said Theresa May was to call for a clean Brexit and that “The paper (by Lyons) was shown to Downing Street and was well received, sources said.” The day before the PM’s speech, a column by Lyons in the UK press (Why a clean Brexit would be best for the new Global Britain) outlined his views, which were identical to those unveiled by the PM. Last November, the Government of Japan invited Lyons to Tokyo to speak about Brexit and its implications.

Dr. Gerard Lyons is an expert on the global economy, financial markets, and monetary policy, with an excellent forecasting record. He has testified to the US Senate Banking and Foreign Affairs Committees, spoken at the EU-China Summit in Beijing, and on the globally televised BBC Debate from Davos.

He is a Board Member of Bank of China (UK), Chief Economic Strategist and shareholder at online discretionary wealth manager Netwealth Investments, advisor to financial consultants Parker Fitzgerald, and Chief Economic Advisor to think tank Policy Exchange. He sits on advisory boards at Warwick Business School; the Grantham Institute on Environmental Change at the London School of Economics and Imperial College; and at the Official Monetary Financial Institutions Forum. He is advising on a project at the Center for Social Justice addressing low UK productivity and its wider economic and social impact.

From January 2013 to May 2016 he was Chief Economic Advisor to Boris Johnson, the Mayor of London. In August 2014, Mr. Johnson launched the report by Lyons, The Europe Report: a Win-Win Situation, widely seen as very influential in the run-up to the Referendum. And in 1999, Lyons was the co-author of the Commission on the £ Sterling, outlining the reasons why the UK should retain the pound and not adopt the euro.

He is an ace forecaster, having won many awards, including Bloomberg’s leading global forecaster (of over 350). In addition, the month before the financial crisis he was one of only two UK economists to predict a deep, imminent recession. 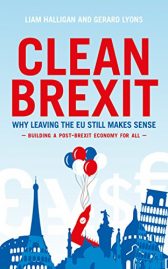