Henry’s story from selling manure at the age of 4 years old to battling with a stutter, being excluded from school, then going on to build a children’s band, write a book with leaders such as Sir Richard Branson, getting investments and everything in between.

Lessons I Have Learnt in Business

Business advice as you have never heard it before. Sometimes all it takes is to see things through a child’s eyes to find the solution. You certainly will look at things from a different perspective after listening to Henry!

Sometimes You Just Have to Jump!

What to do when everyone says you can’t? What to do when you get bullied so much, you physically lose your voice? How do you cope when you read thousands of comments from people personally insulting you? A talk about overcoming adversity and breaking through barriers...

What to do when everyone says you can’t? What to do when you get bullied so much, you physically lose your voice? How do you cope when you read thousands of comments from people personally insulting you?

A talk about overcoming adversity and breaking through barriers.

Henry started his official business journey at the age of nine when he launched children’s brand Not Before Tea. This was based on story book he had written entitled The Adventures of Sherb and Pip. All the characters in the book were bought to life through products such as bags, wash bags and soft toys. Henry’s story has been in the press at home and abroad including Forbes magazine. He has also made several television appearances.  He was the youngest person ever to be interviewed on CNBC’s breakfast business show Squawk Box, he was named One to Watch by the Independent and he appeared on The BBC Show with Richard Branson. Today the products are sold internationally and Henry has just secured investment to grow the brand further.

At 12 years old, Henry was a keynote speaker at the prestigious Retail Week Live event at the 02 in London, where he shared the stage with the likes of Facebook and Google.

Henry uses his childhood experiences as the foundation to his talks. His school life has been tough and he was bullied because he didn’t fit in. As a consequence, he developed a stutter overnight. His journey to re-discover his voice is truly inspirational.

Despite battling a stammer, he developed a love of public speaking and has since spoken alongside some of the worlds top motivational speakers on stages in Malaysia, Singapore, Italy, Berlin, and Vietnam.

In May 2018, Henry launched his first business book entitled Young & Mighty, aimed at young people, 10 to 14, who are starting to think about their future and starting to make sense of what motivates them. It covers some of the big issues that young people face: money, self-esteem, finding your voice, education and creativity. It particularly appeals to those struggling to fit in. Young and Mighty promotes confidence and thoughtfulness, not just material ambition.

His experiences have taught Henry that children can discover their own version of success. The book provides examples from business, the arts and sport contributed such as Sir Richard Branson and Mike Krieger.

“Well, what can I say?! What a fantastic contribution Henry made to Retail Week Live – he broke Twitter and was definitely one of the most talked about speakers.”

“Henry is an extraordinary individual. Self-effacing and yet extremely confident of his own abilities, his matter-of-fact approach to the world of business is a breath of fresh air.”

“As a public speaker, Henry captivates the audience, delivers a great message and engages very well at levels of an organisation. Thank you for your time, energy and willingness to speak to our UK and Republic of Ireland population at such a large event. Good luck for the future, I am sure it is very bright!”

“Henry is an absolute inspiration.”

“I’m excited to see Henry is now setting up Young & Mighty to encourage other young people to start a business and share ideas. His motto is ‘turn your passion into possibilities’, which is an idea I can really get behind. If you do what you love, you’ll move mountains to make it happen and make it successful”. 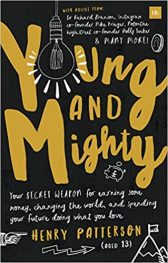 How One Child Became An International Brand by Age 14

Business keynote speaker Henry Patterson started his first business when he was four years old. It was a spin on the...