Goals are Not Dreams, Dreams Are!

Recognized as the best female distance swimmer in U.S. history, Janet Evans is a four-time Olympic Gold Medalist and three-time World Record holder, with 17 international titles, 45 national titles and inductions into the USOC Hall of Fame and ISHOF Hall of Fame.

Despite her small size and unorthodox windmill stroke, Janet Evans was a natural-born swimmer, taking laps across the pool at the age of two. In 1987, when she was 15 years old, Janet Evans broke the world record in both the 400, 800m and the 1,500m freestyle.

At the 1988 Seoul Olympics, Janet Evans won her first gold medal in the 400m individual medley. Three days later, she won the 400m freestyle by more than two seconds and broke her own world record by 1.6 seconds. Janet Evans then added a third Olympic victory in the 800m freestyle.

At the 1992 Barcelona Olympics, Janet Evans easily defended her title in the 800m by leading from start to finish, winning by eight meters; she also won the silver in the 400m.

Janet Evans made one final appearance at the Olympics in 1996, but sites running the Olympic torch as the highlight of that Olympics over the actual competition.

Since the end of her swimming career, Janet Evans has made a name for herself as a commercial spokesperson, author, reality television personality and a highly sought after speaker.

More About Janet Evans . . .
Janet Evans continues to make her presence felt in and out of the pool. In 2007, she published her first book titled Total Swimming which offers fitness programs, workouts, and proper swim techniques to readers.

Janet Evans’ career as a motivational speaker started at the young age of 16 and has turned her into one of the most requested keynotes in the country. Janet Evans executes motivational speeches for top companies in varying fields including: Technology, Healthcare, Real Estate, Telecommunications, Apparel, Banking, Insurance, Trade Associations, packaged goods, non-profits and many others. With her easy style and grace on a podium, Janet Evans has helped veteran salesman and senior executives alike!

“Janet Evans is simply the greatest female swimmer in history. She shares her unmatched knowledge and expertise, as well as her passion for swimming. You will be motivated to be your best in and out of the pool!” 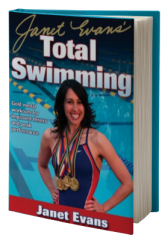