SURVIVING AND THRIVING IN THE NEXT DISRUPTION

Four Ways to Avoid “Post-Disruption Stress Disorder” PDSD has plagued more than one business, from Kodak to Blockbuster, and from Apple to IBM. Four strategies for beating the next disruption in your own category. ...

PDSD has plagued more than one business, from Kodak to Blockbuster, and from Apple to IBM. Four strategies for beating the next disruption in your own category.

How to out-do your competitors by earning your customers’ trust, and why this can insulate you from the next big disruption in your business.

Creating your own disruption is a good way to survive radical technological (or regulatory) change, and offense is always more fun than defense.

Now that what customers say about you matters more than what you tell customers about yourself, what your customers want is for you to be proactive on their behalf.

Trust platforms like Airbnb, Uber and Taskrabbit empower customers with the ability to self-organize, eliminating the middle man. Other businesses can, too. And will.

What is the Value of a Better Customer Experience? How to map the CX, improve it, profit from it.  How does it help us and help our customers?   Why is “customer journey mapping” exactly what’s needed now? The ...

How to map the CX, improve it, profit from it.  How does it help us and help our customers?   Why is “customer journey mapping” exactly what’s needed now?

How to measure your success with customers. Metrics needed to drive your decisions and behaviors, eliminate landmines and build customer equity.

Providing a better CX is costly today, while value is realized tomorrow. Resolve this dilemma to the satisfaction of your CFO.  How much more will customers pay if…?

Anticipating human biases, avoiding statistical errors, and recognizing the limits of the data you have. How to talk with your customer analysts, without equations.

Balancing Work, Life, and Getting Where You Deserve to Be Take it from a woman who has advanced degrees, a history of professional leadership in corporate America and entrepreneurial ventures, and has raised a family while traveling on six ...

Take it from a woman who has advanced degrees, a history of professional leadership in corporate America and entrepreneurial ventures, and has raised a family while traveling on six continents.  It ain’t easy, but you can do it for fun and profit.

One of the world’s most acclaimed leaders in customer experience, customer loyalty, trustability, business technologies, and building equity shares her insights from 25 years in the field with clients, companies, CEOs, and real customers.

Winning the Millennial Generation by leveraging the increasing power, influence, and authority of women in business. How to structure a truly collaborative and social business enterprise.

Managing a Successful Customer-Centric Transformation The key isn’t technology or data or policy. All these things are table stakes. The key lies in the culture of your employees. How to improve and maintain your corporate culture. ...

The key isn’t technology or data or policy. All these things are table stakes. The key lies in the culture of your employees. How to improve and maintain your corporate culture.

When a customer problem comes in, you want your employees to swarm the problem and solve it, without top-down direction. Here’s how to make that happen.

Customer Loyalty: What, How, and Why What it means to “loyalize” your customers, how to do so, why it’s worth the money, and three important obstacles that must be overcome. Using Customer Loyalty to Make Better ...

What it means to “loyalize” your customers, how to do so, why it’s worth the money, and three important obstacles that must be overcome.

The customer’s memory is the most reliable link between the short-term financial effects of current decisions and the long-term shareholder value they might create.

Technology is raising customer expectations, and now you’re competing with Amazon, Apple, JetBlue, and Amex. Four strategies for succeeding in the transparent future.

Recognized for over 25 years as one of the world’s leading authorities on customer-focused business strategies, Dr. Martha Rogers is an acclaimed author and co-founder, along with Don Peppers, of Peppers & Rogers Group. Her latest endeavor is the formation of CX Speakers, a new company which delivers workshops, keynote presentations and thought leadership consulting that is focused on customer experience topics. In 2015, Rogers founded Trustability Metrix, designed to help companies understand how they are trusted by customers, employees and business peers.

Martha’s counsel and insight are regularly sought by Fortune 500 and Blue Chip executives who are trying to crack the code on customer measurement and value, business strategy, trust, corporate culture, innovation, and the effect of emerging technologies. In 2015, Satmetrix listed her and Don Peppers #1 on their list of the top 25 most influential customer experience leaders. Business 2.0 magazine named Martha Rogers one of the 19 “most important business gurus” of the past century, and the World Technology Network cited her as “an innovator most likely to create visionary ‘ripple effects.’”

With co-author and business partner Don Peppers, Rogers has produced a legacy of international best-sellers that collectively sold well over a million copies in 18 languages. Their first book, The One to One Future (Doubleday, 1993), was called by Inc. Magazine’s editor-in-chief “one of the two or three most important business books ever written,” while Business Week said it was the “bible of the customer strategy revolution.”

Peppers’ and Rogers’ ninth book, is Extreme Trust: Turning Proactive Honesty and Flawless Execution into Long-Term Profits (Penguin, 2016). And early 2017, the third edition of their graduate school textbook, Managing Customer Experience and Relationships: A Strategic Perspective (Wiley, 2016) will be released.

Before receiving her Ph.D. at the University of Tennessee as a Bickel fellow and worked her way to full professorship, Dr. Rogers was a copywriter and advertising executive. In academia, she has most recently served as an adjunct professor at the Fuqua School of Business at Duke University, where she co-directed the Teradata Center for Customer Strategy. Martha has been widely published in academic and trade journals, including Harvard Business Review, Journal of Advertising Research, Journal of Public Policy and Marketing, and Journal of Applied Psychology. She has been named International Sales and Marketing Executives’ Educator of the Year. At Peppers & Rogers Group, she led several large subscription-based research studies focusing on particular aspects of CRM, including direct-to-consumer selling. She has blogged for Huffington Post and elsewhere. Martha lives in New York City with her husband, Dick Cavett.

“Thank you for keynoting at our second Sales Execution Forum. You won’t be surprised that people were quoting you throughout the two days and raving about your message. The Martha Buzz was everywhere. You set an amazing tone to kick us off and the program exceeded our expectations. Most importantly, they surpassed the hopes of our guests. Each individual walked away with more information than they could have ever imagined around trustability, innovation and the customer experience.”

“Too often well known industry “experts” don’t live up to their reputation. Martha Rogers certainly does. Not only did she offer valuable insights and thought provoking alternate perspective, but she was genuinely charming, engaging, and approachable. What a treat!” 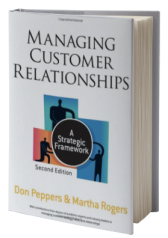 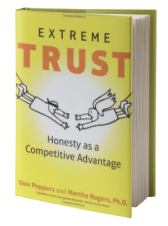