Michael Loftus is a top entertainment keynote speaker and one of the most sought after writer/performers in comedy today. He is currently a writer/producer on FX’s Anger Management, a regular on TruTV’s The Smoking Gun Presents…, and has his own pilot for History Channel.

Michael Loftus is one of the most sought after writer/performers in comedy today. He is currently a writer/producer on FX’s Anger Management, a regular on TruTV’s The Smoking Gun Presents…, and has his own pilot for History Channel.

Michael was a co-producer and executive story editor on the NBC comedy Outsourced and was previously a writer on the hit ABC comedy series The George Lopez Show.

In 2009 his one-hour special You’ve Changed, all about surviving marriage and that one argument you can never win, premiered on Comedy Central.

More About Speaker, Michael Loftus . . .
Michael Loftus is among the most popular headlining comedians touring the country today.

In addition to his own comedy album, he has appeared on the Warner Bros. comedy album Executive Privilege alongside Kevin Pollack and The Best of Bob & Tom CD.

“We could not have been any happier about the choice of Michael. He was a perfect choice for the night time event. He had people in tears for an hour. I still smile when reminiscing about the material. So good, I can’t even tell you. Thanks again!”. 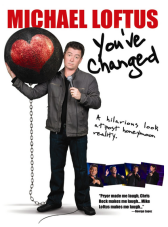