Omar Khan’s Accomplishments Include . . .Omar Khan is one of the pioneers of Neuro-linguistic programming, and was trained by some of its early innovators. He has been a leading innovator in Transformational Learning in the US and throughout the world.

Omar Khan is the founder and senior partner of a global leadership development and consulting firm that operates in the Americas, the UK, Asia/Pacific(Singapore), the Middle East (Dubai) and South Asia (Pakistan, Bangladesh, Sri Lanka).

Omar Khan’s books include Synergy, as well as Timeless Leadership, which is a collection of Omar’s articles published at the behest of his global client base and has achieved three sold-out publishing runs. His most recent book is Liberating Passion: How the World’s Best Global Leaders Produce Winning Results. Omar Khan also co-authored The Global Consultant with best-selling author Alan Weiss.

Omar Khan is arguably one of the most global consultants and speakers in the world. Born in Egypt, the son of Pakistani diplomats, Omar has lived in Germany, the US, Kuwait, Saudi Arabia, the Netherlands, England, Japan, Pakistan, Sri Lanka, Dubai and Singapore. Omar Khan studied at University College Oxford for his B.A. and M.A. before proceeding to Stanford Law School.

Omar Khan was, for many years, partners with the Sri Lanka Anti-Narcotics Association, a UN-approved charity that used his methodologies and processes for grassroots workshops aimed at elevating self-esteem and tackling drug usage.

Omar Khan also worked for years with the Foundation for Community Encouragement (FCE), founded by best-selling author M. Scott Peck (author of The Road Less Traveled), with whom Omar collaborated and partnered in the years prior to the author’s death. A book based on that collaboration is forthcoming.

“…because of the electric atmosphere that you managed to create, broken only by long bouts of laughter and clapping, there is no doubt about it, our hard-nosed, weather-beaten…contractors were falling about laughing, but everybody knew that behind the fun some very serious learning was going on. I knew I was onto a winner when 198 people all lined up in queue to say a personal thanks to me for booking you.”

“Omar Khan is one of the most amazing speakers I have dealt with in my over 17 years of organizing events.”

“You are a unique human being and I feel privileged to have worked with you.” 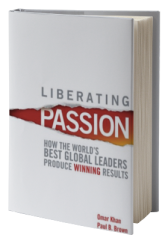