Good Strategy/Bad Strategy is not a rehash of existing strategy doctrines and frameworks. It presents views on a range of issues that are fundamental yet which have not been given much daylight. Good strategy is rare. Many organizations which claim to...

Good Strategy/Bad Strategy is not a rehash of existing strategy doctrines and frameworks. It presents views on a range of issues that are fundamental yet which have not been given much daylight. Good strategy is rare. Many organizations which claim to have a strategy do not. Instead, they have a set of performance goals. Or, worse, a set of vague aspirations. It is rare because there are strong forces resisting the concentration of action and resources. Good strategy gathers power from its very rareness. Richard’s book, keynotes, training and consulting do not offer simplistic formulas for success. Instead, he explains the logic of good strategy and the sources of power that talented strategists have tapped. And, he highlights the pitfalls and fallacies one must avoid.

Richard Rumelt is a sought-after speaker and consultant who works with numerous corporations and other organizations around the world. Through workshops, group facilitation, talks, special projects, and direct one-on-one coaching, he helps executives craft meaningful, ambitious, yet actionable strategies for defining and surmounting their most important challenges and opportunities.  Rumelt’s clients have included institutions such as AT&T, Shell, Telecom Italia, Kings College London, O-I Corp, The National Bank of Canada, Lukoil, Microsoft, HP, Apple, Commonwealth Bank, Intel, the DIA, and the US Army Special Operations Command.

His most recent book, Good Strategy/Bad Strategy–The Difference and Why It Matters, has received many accolades and significant press attention, and was short-listed in the Financial Times Goldman Sachs 2011 Best Business Book of the Year Award.  Widely known for his unique and penetrating perspectives, the McKinsey Quarterly has dubbed Rumelt as “Strategy’s Strategist,” and the Wall Street Journal as “Guru.”

Richard Rumelt professor emeritus at UCLA Anderson, a graduate school of business and management.  Rumelt is widely recognized as having put in place many of the key foundations of the intellectual subject of business strategy in a series of highly-cited books and scholarly articles.  He is a Fellow of the Strategic Management Society and of the Academy of International Business. Among his many honors and awards, he recently has been elected as the 2014 Fellows of the Academy of International Business Eminent Scholar.  Recently, the Thinkers50 organization listed him in the Strategy Hall of Fame.

Rumelt studied decision sciences and corporate strategy at the Harvard Business School, receiving his doctorate in 1972, and before that earned Bachelor’s and Master’s degrees in Electrical Engineering from the University of California, Berkeley.  His first job was at the Jet Propulsion Laboratory in Pasadena, designing Mars Mission spacecraft.

Richard Rumelt resides in Bend, OR with his wife, Kate. 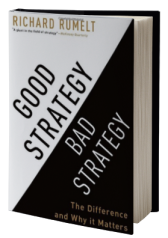