The Art of Thinking Clearly

Earlier in his career, Rolf joined Swissair as CEO of several of its subsidiaries. In 1999, he co-founded get Abstract, the world’s largest publisher of compressed business knowledge. From 2003 to 2008, Rolf hosted a weekly show on Bloomberg Television. He writes a weekly column on cognitive errors for Switzerland’s largest Sunday newspaper and for the reputable weekly Die Zeit. He also reviews books for The Washington Post. Rolf has been quoted in The Wall Street Journal, Financial Times, Harvard Management Update and many other U.S. and European business publications.

Most famously, Rolf is author of “The Art of Thinking Clearly”, which became an instant success and landed on the number 1 best-seller list in Germany, Austria and Switzerland and is being translated into all major languages. Rolf is a member of PEN and serves on the boards of Life Science Zurich and Sosense. In his spare time he writes novels which are published by Diogenes.

Rolf Dobelli is endowed with both imagination and realism, a combination hard to find since the 16th century Renaissance.

author of the New York Times bestseller The Black Swan

Dobelli examines our most common decision-making failings with engaging eloquence and describes how to counter them with instructive good sense. 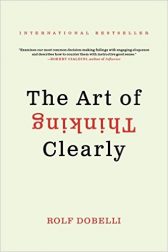