Former Running Back and NFL Anchor

The Business of Football: Football Strategies from the Gridiron to Help You Grow Your Business

Pro running backs develop amazing mental resilience because they “know” they will be tackled on most plays. Successful sales pros have the same mentality. Each team gets to keep the customer only as long as they can keep delivering forward progress. As soon as they ...

Pro running backs develop amazing mental resilience because they “know” they will be tackled on most plays. Successful sales pros have the same mentality.

Pro athletes develop finely tuned active listening skills that allow them to “hear” complicated instructions despite the roar of tens of thousands of screaming fans, which is a skill that successful business pros develop in order to effectively “hear” their clients, their vendors, their competitors and the market.

Well known for his “Mile High Salute,” to fans and teammates in celebration of a touchdown, Terrell Davis has the distinction of being the NFL’s Denver Broncos all-time leading rusher.

Terrell Lamar Davis was born October 28, 1972 in San Diego, California. He began his football career playing in the local Pop Warner league at seven years of age. However, he did not play high school football until his junior year at Lincoln Prep High School where he was a multi- position player his junior and senior years, playing fullback, kicker, and nose tackle. In his senior year, Davis helped lead Lincoln Prep High school to a 12-2 record.

Davis started 14 games during the 1995 season, carrying the ball 237 times, averaging 4.7 yards per run, and scoring eight touchdowns. Davis finished his season with a total of 1,117 rushing yards, becoming the lowest drafted player to ever gain over 1,000 yards rushing in his rookie season. In 1996, he improved that record by rushing for 1,538 yards and setting a Denver Broncos record for 13 rushing touchdowns. The Broncos ended that season with a 13–3 record, tied with the Green Bay Packers for the best in the NFL that year.

Davis was a member of championship Denver Broncos teams in Super Bowl XXXII and XXXIII. In Super Bowl XXXII, he rushed for 157 yards, caught two passes for 8 yards, and became the first player in Super Bowl history ever to score three rushing touchdowns. His performance earned him the Super Bowl MVP honors. Davis’ eight touchdowns in his three playoff games and the Super Bowl gave him a total of 48 points, the most ever scored in a single postseason, the 2006–07 postseason. In 1998, Davis rushed for 2,008 yards, which was then the third highest rushing total in history. This performance earned him league MVP honors, his third straight AFC rushing title, his first NFL rushing title, and his second time being named NFL Offensive Player of the Year by the Associated Press. At the end of the season, the Broncos beat the Atlanta Falcons in Super Bowl XXXIII, with Davis recording 102 rushing yards and 50 receiving yards. Davis was selected for ESPN’s All-Time 40-Man Super Bowl roster as a running back for his performances in Super Bowls XXXII & XXXIII.

In his 8 postseason games from 1996 to 1998, Davis put up impressive numbers: 204 carries for 1,140 yards and 12 touchdowns, along with 19 receptions for 131 yards. This included a streak of 7 consecutive games with over 100 rushing yards, all of which the Broncos won, breaking the previous record for consecutive 100 rushing yard postseason games held by John Riggins.

During his career at Denver, Davis ran for 7,607 yards on 1,655 carries. Davis played seven seasons with the Broncos before retiring after the 2002 season. 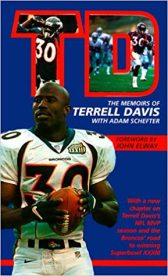