Strategy in the Age of Disruption

Technology Megatrends and Keys to Understanding, Anticipating and Leading Market Disruption. This is the age of Permanent Disruption where every business in every industry now faces constant existential threats. The combination of exponentially ...

This is the age of Permanent Disruption where every business in every industry now faces constant existential threats. The combination of exponentially improving technologies, rapidbusiness model innovation, and instant access to global investors are enabling disruptors tocreate new markets and destroy trillions of dollars of incumbent revenues at an ever-faster pace.Trillion dollar industries on the cusp of major disruption include telecoms, energy,transportation, manufacturing, retail, finance, apparel, health care, real estate, construction and education. Traditional strategy is obsolete and choosing to wait until these technologies are fully developed is choosing to be disrupted.

How can you anticipate and lead market disruption rather than be surprised when it is too late for your company or industry to react? How can you become the disruptor rather than disrupted?Tony Seba will present examples of exponential technologies such as robotics, 3D printing,sensors, the internet of things, machine learning, big data, electricity storage, autonomous vehicles, solar, electric vehicles, cloud computing, e-money, and others, and show incisive new business models and product architectures that may soon disrupt your business.

Clean Disruption of Energy and Transportation

We are on the cusp of the most radical transformation in energy in a century. Exponentially improving technologies such as solar, electric vehicles, and autonomous (self-driving) cars are turning the industrial-era energy industry on its head and making the gasoline vehicle obsolete.

The technology and market trends that are leading to this $12 trillion/year disruption are well underway.
-The global solar market has grown at a CAGR (compound annual growth rate) of 41% since 2000.
-The cost of Solar PV has decreased by a factor of 222X since 1970.
– Solar has improved its relative cost position by 2,900X relative to nuclear 3,200 relative to natural gas since 1970 and 1,294 times relative to petroleum.

This is the video of a keynote titled “”Clean Disruption: Why Energy and Transportation will be Obsolete by 2030”

Just like the PC, the Internet, and the cell phone disrupted the old paradigm of information, computing and telecommunications, a new architecture of energy is transforming the century-old centralized, resource-based, utility-centric energy model with a distributed, mobile, knowledge-based, and user-centric model. Homes, buildings, and cars are no longer passive energy consumers but adaptive learning systems with the ability to generate, store, manage, and transmit power intelligently. The implications are far-reaching: conventional energy sources (oil, nuclear, natural gas, and coal), the internal combustion engine, and the utility business models are on the cusp of disruption. Assets will be stranded and conventional energy portfolios will meltdown. This is not in the future. This is now.

Technology megatrends that are disrupting public and private transportation ...

Technology megatrends that are disrupting public and private transportation

The next decade will see the most radical changes in public and private transportation in a century. Exponentially improving technologies such as electric vehicles, autonomous (self-driving) vehicles, sensors, the internet-of-things, mobile Internet, Big Data, Open Data and Cloud computing are converging at a rapid pace and are radically transforming the very nature of transportation, including roads and highways, parking, tolls, taxis, buses, trains, and traffic management.

– The concept of individual car ownership will be obsolete.

Tony Seba’s keynote address focuses on the megatrends that are reshaping and disrupting public and private transportation and how city planners can stay one step ahead in rethinking and redrawing the transportation landscape in a clean, efficient, and budget-conscious way.

Parking to Parks – Cities and the Self-driving Disruption

The next fifteen years will see the most radical changes in public and private transportation and the energy infrastructure in a century. Exponentially improving technologies such as electric vehicles, ...

The next fifteen years will see the most radical changes in public and private transportation and the energy infrastructure in a century. Exponentially improving technologies such as electric vehicles, autonomous (self-driving) cars, and solar will radically transform the urban landscape. Technologies such as machine learning, sensors, the internet-of-things, mobile Internet, unmanned aerial vehicles (drones), big data, open data and cloud computing are converging at a rapid pace and will enable the most radical transformation of industry and society since the first industrial revolution

As they ponder infrastructure investments, urban planners and policy-makers cannot assume that the future will be like the past. The disruption of energy and transportation will leave trillions of dollars in stranded assets. It will also create new economic opportunities for the entrepreneurs, investors, and cities who anticipate and lead it.

Cities that lead the clean disruption will be healthier, wealthier, and more sustainable.

Tony Seba’s keynote address focuses on the mega-trends that are reshaping public and private transportation and how city planners can stay one step ahead in anticipating, rethinking and redrawing the urban landscape in a clean, sustainable, and budget-conscious way.

Tony Seba is a world-renowned thought leader, author, speaker, educator and entrepreneur. He is the award-winning author of the #1 Amazon best-selling book “Clean Disruption of Energy and Transportation – How Silicon Valley Will Make Oil, Nuclear, Natural Gas, Coal, Electric Utilities and Conventional Cars Obsolete by 2030” and co-author of “Rethinking Transportation 2020-2030″ which have changed the global conversation about the future of energy, transportation and climate change.

Seba’s work focuses on technology disruption, the convergence of technologies, business model and product innovations that are leading to the disruption of the world’s major industries including energy, transportation, agriculture, infrastructure, real estate and finance. He is the award-winning creator of the ‘Seba Technology Disruption Framework” which has been used to accurately understand and anticipate disruptions in several industries. He has taught thousands of entrepreneurs and corporate leaders at Stanford University’s Continuing Studies. Seba is also the cofounder of RethinkX, an independent think-tank that analyzes and forecasts the speed and scale of technology-driven disruption and its implications across society.

Seba has a Stanford MBA and a B.S. in Computer Science and Engineering from Massachusetts Institute of Technology.

He is the recipient of many awards including Solar.Future.Today’s “Visionary Disruptor” award and Clean Energy Action’s “Sunshine Award”

Tony Seba fills the room with passion, energy, and knowledge, and turns skeptics into advocates. We’d invite him back in a heartbeat.

It was a truly terrific presentation – one of the best I have ever seen. It was educational as well as inspirational – and great at both.

Your speech was the highlight of the conference. You were funny, intense and knowledgeable and really got the conference in the right groove from the start 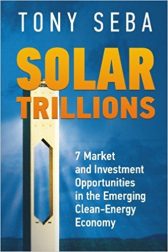 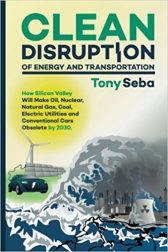