Watts Wacker’s Main Accomplishments Include . . .A renowned futurist, author, provocateur, political commentator and social critic, Watts Wacker is one of the most celebrated and influential minds in modern business. His uncommon versatility and vision has allowed him to help the world’s top corporations and organizations navigate the sea of change that is taking hold in the new millennium. Watts Wacker has been the futurist at SRI International – the legendary Menlo Park think tank, and spent ten years as the resident futurist at the preeminent social research organization, Yankelovich Partners.

As founder and director of his own consultancy, Watts Wacker has focused his attention on creating a new kind of think tank. He describes himself as a twenty-first century alchemist as well as… “a cross between James Brown and the unknown comic, (the hardest working nobody in the business.)” Watts Wacker’s unique speaking style has earned him recognition as one of the best storytellers alive today.

Watts Wacker’s book, The 500 Year Delta was an international bestseller, having been translated into ten languages and was an “editors choice” top five selection on the Amazon.com book list for 1997 and was also selected for the NASA library. Watts Wacker’s second book, The Visionary’s Handbook is required reading at many of the world’s finest business schools and received outstanding reviews. His third book, The Deviant’s Advantage received a tremendous reviewer response including from Time Magazine, Fortune, The New York Times, and The Harvard Business Review. Watts Wacker’s fourth book, What’s Your Story? Storytelling to Move Markets, Audiences, People and Brands, was a finalist for advertising/marketing book of the year. Recent work has included contributing, editing and ghost writing numerous books, broadcast commentary as well as magazine and journal articles.

Watts Wacker’s matriculative background includes degrees from both Tulane University and the University of Texas in Austin as well as a research fellowship at The Institute for Constructive Capitalism. He has lectured at many colleges and universities around the world.

Watts Wacker resides in Connecticut with his wife.

“[Watts Wacker is] on our list of the 50 most influential business thinkers in the world.”

“The inheritor of the Marshall McLuhan tradition.” 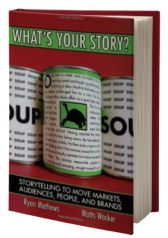