Cybil Shepherd is one of a few women in the past three decades who have have lit up the American imagination this much. From heartbreaking movie star to one of television’s most beloved comediennes, from wholesome beauty queen to captivating cover girl, and from naive sex kitten to liberated, political spokeswoman, Shepherd has imbued these roles with an indomitable spirit that had made her a female icon to an entire generation.

In 2001, her hilarious, gusty, and insightful memoir, Cybill Disobedience: How I Survived Beauty Pageants, Elvis, Sex, Bruce Willis, Lies, Marriage, Motherhood, Hollywood, and the Irrepressible Urge to Say What I Think was published detailing her amazing  life story as only she can – with humor, pathos, and an insatiable lust for life.

Shepherd appeared in the feature film, Marine Life, directed by Anne Wheeler and written by Robert Forsyth III and Lori Lansens. From 1995-1998 she starred as Cybill Sheridan in the popular CBS sitcom Cybill. She has had an extensive experience on the stage as well, including starring roles in “Shot in the Dark,” and “The Seven Year Itch,” to name a few. Shepherd has starred in many television series, such as Yellow Rose and Moonlighting, and has hosted the Emmy and Golden Globe awards. She was awarded four Golden Globe Awards for best actress in a television comedy, and she won four People’s Choice Awards and was honored with Bruce Willis as “Woman and Man of the Year in Broadcasting” by the Hollywood Radio and Television Society.

In addition to her acting, Shepherd has performed sold-out concerts around the world blending blues, rock, ballad and standards as well as her own compositions. Cybill has recorded nine albums, releasing her most recent, Live at the Cinegrill, in 2001. 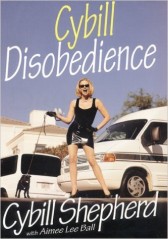