Original and outrageous, British designer Vivienne Westwood is one of the most recognised and influential designers of the late twentieth century.

By her mid-twenties, Vivienne Westwood’s life seemed to be passing in a distinctly unremarkable way. At 25, she was married to an air steward, she lived in Willesden, went to church and taught in a local primary school.

Then something remarkable happened, she met Malcolm Mclaren, future manager of the Sex Pistols, and he led her into the underground of the late 1960’s street. He lectured her on the political power of art and liberated her creative desires from their bondage in working class conformity. Westwood became a subversive seamstress of pop.

She began designing in 1971, using the shop at 430 Kings Road, London as a showcase for her ideas. With her changing ideas of fashion came the change of not only the name of shop, but the entire decor as well. In 1971, 430 Kings Road was known as “Let it Rock”… 1950’s Rock n Roll clothing sold at a time when “hippies” were still in fashion. In 1972, the name was changed to “Too Fast to Live, Too Young to Die”.  The shop had clothing for “Rockers” with zips and chains, and Zoot suits. By the mid 70’s, “Sex” was the shop’s new name. With 1976 came punk, followed by “World’s End” and the Pirate Collection.

The punk storm drove Westwood before it, putting her at the forefront of street culture but Westwood was left thinking “what next?”

Pirates were the answer. The early 1980s was the time of the New Romantics, an urban arts scene that eschewed gender distinctive dress to delight in the theatre of courtier costume and whirls of eyeliner. Catching their mood, Westwood looked back to the 19th Century for her first collection, which she called Pirates. With Pirates, Westwood’s success was secured. She showed in Paris in 1983 and never looked back.

In Autumn 1984, Westwood was invited to show her collection in Tokyo with Hanae Mori, Calvin Klein, Claude Montana and Gianfranco Ferre at the “Best of Five”.

In 1989 Mr John Fairchild, President of Fairchild Publications and Editor of the fashion bible “Women’s Wear Daily”, rated Westwood one of the best six designers in the world, and the only woman amongst them, in his book “Chic Savages”.

In the 1990s, her interest shifted into haute couture and she has made extensive use of British wools, tartans, tweeds and linens. In July 1990, she showed her first complete menswear collection in conjunction with Pitti Uomo in Florence.

In January 1991, Vivienne Westwood was chosen to show in Tokyo once again, this time with Christian Lacroix, Isaac Mizrahi and Franco Moschino at The Fashion Summit. She has twice been named British designer of the year, was awarded an OBE for her services to the British Fashion Industry and has been awarded the Queen’s Award for Export.  In January 2007 Vivienne Westwood was awarded a DBE.

She actively supports the environmental charity, Cool Earth, in their efforts to save the rainforest and stop climate change, as well as working with the UN Environmental Protection Agency to re-establish the fragmented forests of Europe. Vivienne has also joined forces with the UN’s ITC to create the Ethical Africa project – an ongoing venture to provide people in Africa with the resources to be able to work and build a trade. Vivienne has written her ideas in a Manifesto called “Active Resistance to Propaganda“. The AR Manifesto evolved through her fashion shows which she uses as a platform for her cultural and environmental concerns. It is a call to all to become more cultivated and in doing so gain the strength and wisdom needed to live life well now and to save the planet for the future. 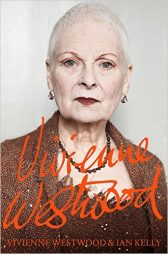