Looking to private investments to accelerate the green transition worldwide.

Hazel Henderson’s Key Accomplishments Include . . .
Hazel Henderson is a world renowned futurist, evolutionary economist, a worldwide syndicated columnist, consultant on sustainable development, and author of The Axiom and Nautilus award-winning book Ethical Markets: Growing the Green Economy. Her other books include Building A Win-Win World, Beyond Globalization, and Planetary Citizenship . Hazel Henderson also co-edited, with Harlan Cleveland and Inge Kaul, The UN: Policy and Financing Alternatives.

Hazel Henderson has been concerned with finding the unexplored areas in standard economics and the “blind spots” of conventional economists. Most of Hazel Henderson’s work relates to the creation of an interdisciplinary economic and political theory with a focus on environmental and social concerns. For instance, she has delved into the area of the “value” of such unquantifiables as clean air and clean water, needed in tremendous abundance by humans and other living organisms. This work led to the development, with Calvert Group of the Calvert-Henderson Quality of Life Indicators.

More About Hazel Henderson. . .
Hazel Henderson is on the board of the International Council of the Instituto Ethos de Empresas e Responsabilidade Social, Sao Paulo, Brasil, a Patron of the New Economics Foundation (London, UK) and a Fellow of the World Business Academy. The first version of her Country Futures Indicators (CFI©), an alternative to the Gross National Product (GNP), is a co-venture with Calvert Group, Inc. 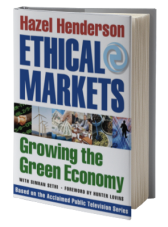