Dr. Ichak Adizes is a top corporate performance speaker and one of the leading management experts in the world. He was ranked by Leadership Excellence Journal among the “Top Thirty Thought Leaders of America” and by Executive Excellence Journal among the “Top Thirty Consultants of America.” For his contribution to management theory and practice, Dr. Adizes has been awarded ten honorary doctorates including one from the Academy of Economics and the Academy of Finance of the Russian Federation.

How to Transition from Entrepreneurship to Professional Management

Concepts on the Leading Edge

Corporate Lifecycles: The Pursuit of Prime How to Make the Transistion From Entrepreneurship to Professional Management Effectively

How to Enable Transparency Without Losing Control

How to Rejuvenate an Aging Organization

How To Build A Common Vision for Your Organization

How to Diagnose Organizational Problems and Their Causes

Dr. Ichak Adizes is one of the leading management experts in the world. He was ranked by Leadership Excellence Journal among the “Top Thirty Thought Leaders of America” and by Executive Excellence Journal among the “Top Thirty Consultants of America.” For his contribution to management theory and practice, Dr. Adizes has been awarded ten honorary doctorates including one from the Academy of Economics and the Academy of Finance of the Russian Federation. In addition, Ichak Adizes has received two honorary citizenships, the honorary rank of Major from the military, was elected a Fellow of the International Academy of Management and was appointed Honorary Scientific Advisor to IBS – Academy of Economics of the Russian Federation.

Ichak Adizes served as tenured faculty at UCLA, a Visiting Professor at Stanford and on the teaching staff of Columbia University. Today, Dr. Adizes is the Founder and President of an international consulting company which applies the methodology for managing accelerated change for exceptional results that bears his name, ranked by Executive Excel­lence as one of the “Top Ten Consulting Organizations in the USA.”

Ichak Adizes has published numerous articles, videos and books which have been translated and published in more than 50 editions and twenty six languages. His Corporate LifeCycles:How Organizations Grow and Die and What to Do About It was selected as one of the “Ten Best Business Books” by The Library Journal. Some of Dr. Adizes’ other works include: Self-Management; How to Solve the Mismanagement Crisis; Mastering Change: The Power of Mutual Trust and Respect in Personal Life, Family, Business and Society; Pursuit of Prime; The Ideal Executive; Management/Mismanagement; Leading the Leaders; and How to Manage in Times of Crisis.

Dr. Adizes is actively involved in consulting to business and political leaders throughout the world. Ichak Adizes works in English, Spanish, Hebrew, Serbian, Croatian and Bosnian. Dr. Adizes also understands Bulgarian and Portuguese. Global leaders as well as thousands of top executives in fifty two countries have attended his lectures.

More About Dr. Ichak Adizes . . .
Ichak Adizes is one of the world’s leading experts on improving the performance of business and government by making fundamental changes without chaos and destructive conflict. Over the past 35 years, Dr. Adizes has worked with some of the largest commercial organizations in the world and consulted with many heads of state.

The Adizes Program for leading organizations to prime performance, has been used successfully by over 1,000 organizations worldwide, ranging in size from Fortune 100’s and non-profits to start-ups and mid-sized companies. As an advisor to foreign governments, Ichak Adizes has consulted and/or lectured the Prime Ministers and cabinets of Israel, Sweden, Greece, Brazil, Ghana, Iceland, Mexico, Macedonia and others.

Dr. Adizes is married, has six children and resides in Santa Barbara, California.

“Adizes is the Darwin of corporate evolution.”

“The U. S. foreign policy world–as well as the international community as a whole–would benefit greatly from a deeper understanding of Ichak Adizes’ insights and theories.”

Former Director of the U.S. Arms Control and Disarmament Agency and former U.S. Representative to the United Nations

“Everything that I have learned about Management I learned from two people: Peter Drucker and Ichak Adizes.”

“Adizes helped us generate better ideas and a climate where they can be better implemented.”

Founder and Past President, Domino's Pizza

“The Institute’s methodology has enhanced internal communications by encouraging habits of participatory management and by helping us accept change as normal and as continuous opportunity for the bank.”

“Adizes has been an invaluable resource and insightful advisor in my efforts to restore entrepreneurial vitality to mature business organizations throughout the world.” 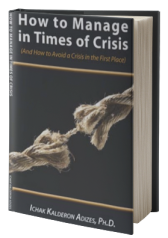