Achieving Predictable Success: How You Can Grow Your Business and Dominate Your Industry – In Any Economy.

Target audience: Founders, owners and C-Level executives in organizations of any size. Business investors and advisors. Topic Description: Is success in business a transient, hard-to-define combination of hard work, ...

Target audience: Founders, owners and C-Level executives in organizations of any size. Business investors and advisors.

Topic Description: Is success in business a transient, hard-to-define combination of hard work, judgment and good luck? Or do all successful organizations follow similar patterns that, once understood, are predictable and repeatable?
In this, his signature keynote address based on his Wall Street Journal bestseller “Predictable Success: Getting Your Organization on the Growth Track – and Keeping it There“, Les McKeown draws from his unique experience as a serial entrepreneur (Les started 42 companies by age 35, and has advised hundreds more since then) to demonstrate unequivocally that yes, any organization’s success can indeed be made predictable simply by understanding and following a clear, repeatable pattern  – a pattern he calls ‘Predictable Success’.

Funny, self-deprecating, brilliantly incisive and most importantly – instantly actionable, Les will have your audience intrigued and engaged from the get-go. And when the keynote is over, be prepared to hear your event attendees tell you it was the most immediately usable presentation they ever attended.

Transcendent Leadership: How to Lead Any Organization, Division, Department, Group or Team to Predictable Success.

Topic Description: You can’t have enough high-quality leadership in any organization, right? And yet, despite the thousands of books, courses and other leadership resources out there, the demand for leadership in most organizations greatly outstrips the available supply.

But what if you discovered a hidden, untapped pool of highly effective leaders right now – today – lying dormant in your very own people?

In this highly entertaining and revelatory keynote (based on his most recent book, “The Synergist: How to Lead Your Team to Predictable Success”) Les McKeown shows how in his extensive experience (he started over 40 companies in his own right and has advised many hundreds more) over 80% of the leadership pool in most organizations is left untapped.

Les will entertain, inform and inspire your audience, but most importantly they will take away a simple but incredibly powerful, proven technique for unleashing leadership at every level in their organization – whatever its size.

Be Big, Be Cool: How to Scale Profitably and Still Have Fun.

Target audience: Founders, owners and C-Level executives in growing organizations of any size. Topic Description: Growing businesses often fear the change that comes with growth. What if we scale but lose our culture...

Target audience: Founders, owners and C-Level executives in growing organizations of any size.

Topic Description: Growing businesses often fear the change that comes with growth. What if we scale but lose our culture – or worse, our soul? Is financial return alone a justifiable reason to leave behind the fun?

Les McKeown – a highly successful serial entrepreneur who launched and ran over 40 businesses and advised hundreds more – says it doesn’t need to be that way. In this exciting, example-filled keynote, Les shows how to build a business that can reach any size it industry allows – without compromising on culture.

Your audience will be challenged, re-energized, inspired and motivated by this talk – but most importantly, they will take away a clear, easily-acted-on toolkit for profitable growth that will enable them to scale their organization, division, department, project, group or team without compromise.

Becoming A Nimble Giant: Your Large Organization, Division, Department, Group or Team Can Learn to Turn on a Dime.

Topic Description: With size comes complexity. And complexity slows things down – right? So large organizations inevitably lose their flexibility and the ability to innovate.

That’s certainly the received wisdom, but Les McKeown says it ain’t necessarily so.

A highly successful serial entrepreneur with over 40 businesses under his belt, and an advisor to hundreds more including Microsoft, T-Mobile, The US Army and American Express, in this fascinating and highly entertaining keynote Les reveals the eye-poppingly simple yet immensely powerful model that ‘nimble giants’ use to stay flexible, responsive and innovative.

Watch your audience relax, laugh and nod in recognition as Les describes the difficulties faced by every large organization in conquering complexity, then excitedly scrabble to make notes as he outlines a simple, immediately actionable method for restoring lost vitality, vibrancy and innovation to any organization, division, department, project, group or team.

Do Lead: Share your vision. Inspire others. Achieve the impossible

An exciting new keynote around the central premise which is that the old model of building leaders is broken and instead we need to build a culture of Leadership, where any employee, at any level can lead.

Les McKeown’s Key Accomplishments Include . . .
Les McKeown is a serial founder/owner, sought-after advisor, best selling author and in-demand speaker. A native of Ireland, he first distinguished himself as that country’s youngest-ever accounting partner.

After working at Price Waterhouse, Les McKeown became a serial entrepreneur – launching over 40 separate businesses from a Pizza Hut master license, to a graphic design agency. He also started a tool and die manufacturing company in addition to one of Ireland’s leading contemporary art galleries, while simultaneously co-founding a business incubation consultancy that grew to 13 offices worldwide.One of Les McKeown’s crowning achievements was the creation of the European Union’s award-winning Entrepreneurship Program which launched literally hundreds of businesses, employing thousands of people. Les ultimately sold his share in that business and relocated to take over the firm’s US operations.

Now based in Marblehead MA, Les McKeown works with senior leaders every day to help them restore equilibrium to their companies, re-ignite confidence in their own management skills, and lead their teams forward into the next stage of growth. As a trusted consultant to virtually every type of leader – CEOs of global multinationals, SVP’s of large non-profits, owner/managers of mid-sized businesses, and “solopreneurs” of emerging companies, Les McKeown addresses the seven stages that any business could possibly face in its lifecycle. Through a new model called “Predictable Success” he enables anyone, at any level, in any company to make transformation possible.

Les McKeown is the author of Predictable Success: Getting Your Organization on the Growth Track– And Keeping It There. In the book, Les describes seven stages of the business life-cycle, with “Predictable Success” being at the peak. Developed by McKeown, “Predictable Success” is a business growth methodology for any group of people, be it an organization or a division, department, group, team or project – which they can utilize consistently (and with relative ease) to achieve their common goals, maintain success – and keep it there.

“Les really captures the integration of key business processes, people, and leadership to consistently deliver a compelling vision, comprehensive plan, and profitable growth for the benefit of all stakeholders.”

“I learned more from Les than in my cumulative 15 years previous business experience. Les came in from the outside and was able to both accurately identify our current and future business challenges as well as provide us with strategies and solutions for dealing with them effectively. It was like he had been there all along!”

“Les not only knows – and shows – how your business can grow and succeed, he explains it in a way that is intuitive, entertaining and immediately actionable.”

“If you want a road map to get to the next stage with your organization, I urge you to get on board with Les McKeown.” 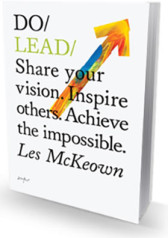 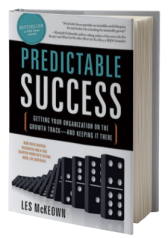 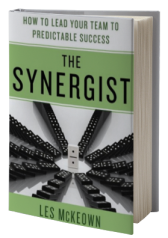