An Evening with John Cleese

Seven Ways to Skin an Ocelot

What's So Funny? Tips for Success in Education, Business and Relationships

Creativity in Business: How Making Your Workplace Fun can Improve Your Bottom Line

John Cleese on Business and Life: And You Thought You'd Figured it Out!

John Cleese’s Key Accomplishments Include . . .
Best known for his brilliant humor and classic TV and film performances, John Cleese is also an extraordinarily popular lecturer who enthralls packed audiences worldwide. Often named “the funniest man alive,” John Cleese is both a versatile comedic actor and a leading business motivator. With the legendary Monty Python’s Flying Circus, Fawlty Towers and A Fish Called Wanda, he created a unique comedic style that has inspired countless writers and comedians.

An instigator of some of the more groundbreaking developments in twentieth-century comedy, John Cleese is one of the world’s best-known actors, writers and comedians. Famous primarily for his comic efforts, such as the television series Fawlty Towers and the exploits of the Monty Python troupe, John Cleese has also become a well-respected author in his own right and has co-written such books as Families And How to Survive Them and Life And How to Survive It.

John Cleese’s influence is also felt in the corporate world as the founder of Video Arts, the world’s largest provider of business training programs. Established in 1972 with three fellow British actors, Video Arts gained an international reputation as the premier source for business know-how. Despite his diverse interests, one of his steadfast commitments has always been to business training.John Cleese attributes his success at making hit training programs to his fascination with psychology and his love for teaching and making people laugh. He believes that “humor in training increases retention and decreases anxiety. When the training point is surrounded with humor, it can be readily digested, remembered and applied.”

More About John Cleese . . .
John Cleese grew up in the middle-class seaside resort town of Weston-super-Mare and enrolled at Cambridge University with the intention of studying law, but soon discovered that his comic leanings held greater sway. He joined the celebrated Cambridge Footlights Society – and was initially rejected because he could neither sing nor dance – but was accepted after collaborating with a friend on some comedy sketches. Cleese soon gained a reputation as a team player and met future writing partner and Python Graham Chapman.

John Cleese entered professional comedy with a writing stint on David Frost’s The Frost Report in 1966. While working for that BBC show, Cleese and Chapman met fellow Frost Report writers Eric Idle, Terry Jones, and Michael Palin. They were soon collaborating on what would become Monty Python’s Flying Circus with Terry Gilliam. The show, which first aired in 1969, was an iconoclastic look at British society: its genius lay in its seemingly random, bizarre take on the mundane facets of everyday life, from Spam to pet shops to the simple act of walking. John Cleese stayed with Monty Python for three seasons; after he left, he reunited with his fellow Pythons for three movies. The first, Monty Python And The Holy Grail (1974), was a revisionist take on the Arthurian legend that featured John Cleese as the Black Knight, who refuses to end his duel with King Arthur even after losing his arms and legs. Life of Brian followed in 1979; a look at one of history’s lesser-known messiahs, it featured lepers, space aliens, and condemned martyrs singing a rousing version of “Always Look on the Bright Side of Life” while hanging from their crucifixes. The Pythons’ third outing, the 1983 Monty Python’s The Meaning of Life, was a series of increasingly outrageous vignettes, including one about the explosion of a stupendously obese man and another featuring a dinner party with Death. 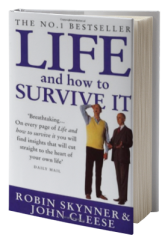