What do Thomas Edison, Chris Rock, and Jeff Bezos all have in common? Answer: An understanding that the biggest ideas spring forth from a series of small discoveries, reworked to achieve a great result. ...

What do Thomas Edison, Chris Rock, and Jeff Bezos all have in common?

Answer: An understanding that the biggest ideas spring forth from a series of small discoveries, reworked to achieve a great result.

Based on extensive research, including over 200 interviews with successful creators and innovators, Sims demonstrates that the kind of linear problem-solving and fear of failure we were conditioned to embrace actively thwarts creativity. Whether it’s Steve Jobs or architect Frank Gerhy or the ‘brain-trust’ at Pixar, there is no complete plan or vision at the outset. Rather, through a process of trying and failing in incremental ways, they gain critical information as they go from one small, experimental step to the next — which eventually lead to extraordinary breakthroughs. These so-called “little bets” helped spark the ideas that led to companies like Twitter and blockbuster movies like the Toy Story franchise. We can learn to think and work like those we think of as geniuses — failing fast to learn quickly, trying imperfect ideas, focusing on finding problems rather than solving them, and practicing highly immersed observation—to turn our own little bets into big successes.

Based on the lessons learned from 125 of the world’s most-respected entrepreneurs and leaders profiled in TRUE NORTH: Discover Your Authentic Leadership, including Charles Schwab, Starbuck’s founder Howard Schultz, CEO of Palm Inc. Donna...

Little Bets + Black Sheep = This Revolution Will Be Improvised

The world is being disrupted by globalization and technology, and the traditional ways of doing things are increasingly ill-equipped to solve the problems. What will fill the gaps — in government, business, and culture? It all begins with little ...

The world is being disrupted by globalization and technology, and the traditional ways of doing things are increasingly ill-equipped to solve the problems. What will fill the gaps — in government, business, and culture? It all begins with little bets: small, affordable risks taken to discover problems, needs, and opportunities in order to find big bets. What do Apple CEO Steve Jobs, comedian Chris Rock, prize-winning architect Frank Gehry, and the story developers at Pixar films all have in common? They all rely upon a mindset of making small bets when doing something new, and they’re all also “black sheep” — willing to challenge conventional wisdom and be understood, often for long periods of time, in order to invent new approaches in their own lives and for society. The world needs a creative renaissance led by courageous BLK SHP, who get sh*t done and solve problems quickly and creatively. Are you a black sheep? This revolution will be improvised.

Peter Sims is a best-selling author and the founder & CEO of BLK SHP, Inc. — a place and platform for making small bets, forging co-conspiracies, and building new ventures. He is also an Adviser at (Google) X, Alphabet’s Moonshot Factory.

His book Little Bets: How Breakthrough Ideas Emerge from Small Discoveries, was selected as one of the six best advice books for entrepreneurs by the Wall Street Journal and as one of the best business books of the year by The Washington Post and Inc. Magazine. He was the co-author with Bill George of True North: Discover Your Authentic Leadership, which was a Wall Street Journal and BusinessWeek best-seller.

Previously, he worked in venture capital, including as the co-founder of Summit Partners’ European Office in London.

Peter was a co-founder of Giving Tuesday, an international charity movement and day of giving, that raised over $1 billion for social good causes in 2018.  He was also the co-founder of FUSE corps, considered the White House Fellowship for city government, that contributes over 100,000 hours of public service annually.

He is a graduate of Bowdoin College and Stanford Business School, and studied design thinking at Stanford’s Institute of Design (the d.school).

Peter is the also founder of the BLK SHP Foundation, a global community of creative misfits that seeks to unlock the inner artist in everyone, recognizing that no one does that alone.

As a sixth-generation Northern Californian, his great-great-great-grandfather, Jacob Gundlach, founded Gundlach Bundschu (GunBun) in Sonoma, California’s oldest family-owned winery, which is run today by his cousins who, unlike Peter, actually know a lot about wine.

“Peter connects with his audience and conveys his points through vivid examples and stories that employees at all levels can relate to.  The feedback was overwhelmingly positive!”

“Peter Sims joined us for our annual conference as the lead keynote speaker, and we couldn’t have been happier. He has the ability to reach out and inspire each person in the audience with his knowledge and expertise.  The event was a great success with much of the credit going to Peter for helping engage and impact the audience.” 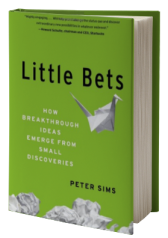