Overcoming Bullying and Finding My Voice

In this talk, Aija performs a spoken word piece about her story overcoming bullying. Aija then talks about the definition of bullying, the bystander effect, the importance of being an upstander, how to ask for help, cyber bullying, and outlets to cope with bullying.

Talking to Parents and Educators about Bullying

-The process of writing a book as a teenager -Facing rejection and finding a plan B -Self publishing and self promoting -Finding a niche market and reaching young people around the world with social media -The power of the internet and technology...

Finding my Voice and Building a Business as a College Student

-Becoming a bestseller after my freshman year of college and going on tour every week, while taking a full load of classes
-Balancing work, school, and activism
-Cultivating a business as a college student

The Truth About Being A Girl

Aija Mayrock is the 22 year old #1 bestselling author of “The Survival Guide to Bullying.” Aija started writing her book at 16 years old, after having been bullied. Aija initially self published her book before it was acquired by Scholastic and published in the United States in 2015. Aija’s book has since been published in many countries all over the world, including: France, Russia, Romania, Denmark, Vietnam, and Portugal. Aija’s book has also been incorporated in school systems around the U.S.

Aija has traveled all over the U.S. to speak to kids, educators, community leaders, and politicians. Aija is an inspirational speaker and performer of spoken/word rap for over 3 million people, including at venues like Madison Square Garden, Town Hall in New York, the United Nations, and the Key Arena Seattle.

In the past year, Aija has turned her attention to issues of gender equality and female empowerment. Aija has written, performed, and filmed a series of spoken word videos with Buzzfeed such as “The Truth About Being A Girl” and “Dear Girl” that went viral and was viewed by millions around the world. In July 2018, Aija opened the United Nations Girl Up summit in Washington, D.C.

Aija was on the cover of the Saks Fifth Avenue Fashion Book for the September Issue and part of the Fearless Women campaign. Aija has also been part of the movement to register young people to vote, joining forces with DO SOMETHING for their voter registration campaign.

Aija was named one of the Today Show’s heroes of the year for 2018.

Aija is a senior at New York University.

Aija Mayrock had 500 kids “mesmerized,” at a recent assembly in one of our middle schools. Her powerful message, her charisma, and her polished presentation skills make for a potent combination. Junior high kids can be a tough crowd, and they certainly have antennae for authenticity. Aija continues to wow amidst such diverse audiences and this is truly impressive.

Aija Mayrock delivered a compelling and emotionally resonant presentation at our association’s annual conference for heads of school. She connected well with her audience as she shared several powerful poems and stories drawn from her own personal experiences as a student. 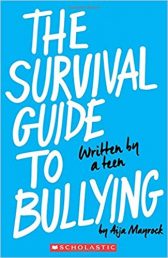