Tools for success: How to maintain the discipline to stay focused, handle pressure and eliminate the fear of failure to set and achieve long-term goals

Overcoming Obstacles: Failure Can Be an Asset

2001 marked the end of one of the most illustrious and groundbreaking careers in sports history. Five-time Olympic track and field champion Michael Johnson captivated the world as he broke record after record, with time to spare. His achievements are extraordinary.

He held the world record in the 200 meters until 2009 when Usain Bolt broke the record. He holds the 400 meters record and has won the Gold for both events at the same Olympic Games-a feat never accomplished by any other sprinter. He is also the only man to win the 400 meter at successive Olympics.

He has won an unprecedented nine world titles and retired with a glittering collection of 19 gold medals. Michael humbly attributes his success to “a combination of God-given talent and hard work”.

Hailed as the fastest two-event performer of all time, Michael Johnson epitomizes the true meaning of what winning and being a champion is all about. With his trademark gold shoes and remarkable combination of endurance and speed on the track, Michael is a world-class sprinter and to this day, he is the only man who can fairly be mentioned in the same breath as track legends Jesse Owens and Carl Lewis.

Since his retirement, Michael has been earning standing ovations off the track as he speaks to corporate audiences around the world. Michael shares his message about what it takes to succeed in business and in life.

As part of the build-up to the 2012 Summer Olympics, Johnson made a documentary, Survival of the Fastest, for Channel 4 which investigated the dominance of Afro-American and Afro-Caribbean sprinters 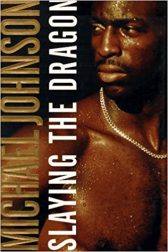