Innovative Technology Virtual Speaker, CEO and Founder of Emotiv, One of the Most Influential Women in Technology

Tan Le is a top innovation and business virtual keynote speaker, technology entrepreneur, author, and founder and CEO of EMOTIV. She has won numerous awards, including Young Australian of the Year in 1998,  Australia’s 30 Most Successful Women Under 30, Most Influential Women in Technology by Fast Company in 2010, and Forbes 50 Names You Need to Know in 2011.

How do successful entrepreneurs come up with ideas that change the world? Tan Le, chosen by Fast Company as one of the Most Influential Women in Technology in 2010, credits her success in innovation to her early struggles growing up as ...

How do successful entrepreneurs come up with ideas that change the world? Tan Le, chosen by Fast Company as one of the Most Influential Women in Technology in 2010, credits her success in innovation to her early struggles growing up as a Vietnamese refugee and Australian immigrant.

In this moving presentation, Le talks about the moment she realized her outsider status provided a freedom to think differently and helped her succeed as a woman working in biotechnology and engineering—where the challenge is to constantly push the boundaries of what is possible. Le will show audiences how free to themselves from the norms that get people stuck, to look at things with a fresh perspective, and to never stop asking questions.

Virtual Keynote: The NeuroGeneration: How the New Era in Brain Augmentation Is Revolutionizing the Way You Think, Work, and Lead

Due to rapid technological innovations in automation, A.I., and brain augmentation, there will be a dramatic disruption in social systems, political norms, and popular expectations. Society will be forced to rethink the nature of work, the way ...

Due to rapid technological innovations in automation, A.I., and brain augmentation, there will be a dramatic disruption in social systems, political norms, and popular expectations. Society will be forced to rethink the nature of work, the way we interact with each other, and the principles on which we organize our societies. Advances in integrating humans and machines that combine analytical processing powers of computers with the creativity that is uniquely human will change how we think and lead.

In this talk, Tan Le will show automation and A.I. are not the threats they appear to be, but rather our allies as they become part of the new extended, augmented human organism.

TAN LE is recognized as one of the most influential pioneers in the emerging field of brain-computer interface. An inventor, author and entrepreneur, she is the founder and CEO of EMOTIV, a San Francisco–headquartered neuroinformatics company.  EMOTIV’s mission is to improve understanding of the human brain and develop a platform for researchers, developers, and consumers around the world to be part of a global innovation task force. The company’s non-invasive “brainwear” reads and interprets brainwaves, making it possible to control virtual objects with mere thoughts.

Born in South Vietnam, Tan migrated to Australia as a refugee with her family in 1981. In 1998, Tan was named Young Australian of the Year for her community work, catapulting her into a prominent role as a social activist and public speaker. Tan has been honored by the World Economic Forum (WEF) as a Young Global Leader since 2009 and served on the WEF’s Global Future Council on Neurotechnologies. Tan was featured in Forbes’ 50 Names You Need to Know in 2011, and named a National Geographic Emerging Explorer in 2013. Tan received the 2018 Industrial Research Institute Achievement Award for “outstanding accomplishment in individual creativity and innovation that contributes broadly to the development of industry and to the benefit of society.” In 2018, a portrait of Tan was added to the permanent collection of the National Portrait Gallery of Australia – an honor bestowed on prominent Australians whose lives sets them apart as individuals of long-term public interest. Tan’s book, The NeuroGeneration: The New Era in Brain Enhancement That Is Revolutionizing How We Think, Work & Heal was published in 2020.

“Tan was AMAZING!  She exceeded our expectations. THANK YOU for listening to what the nuances were of our group, as well as taking the time to understand the personalities of our audience and decision makers. Homerun!”

“Tan Le was one of six speakers discussing future thinking with Edward De Bono. In the company of a former Prime Minister, heads of industry and advertising wizards, she not only held her own but often shone.”

“Tan Le’s story immediately captured the imagination of the audience, and the depth of her message proved so inspirational, that many were moved to share how Tan had impacted upon them emotionally.”

“Tan’s message was an inspiration to all present by showing that a great leader is someone who can envision the future and inspire others to achieve it.”

“Tan Le is an extraordinarily gifted speaker with the ability to engage and move an audience in an intimate way.”

“Tan Le was awesome!  As we knew she would be!  We had over 400 in the audience, including Dr. Arlan DeKock, the professor emeritus. Audience comments following the event were extremely favorable. Thanks for helping us make it a BIG and memorable day — a most fitting kickoff to the next half-century of Computer Science at Missouri University of Science and Technology.”

Missouri University of Science and Technology 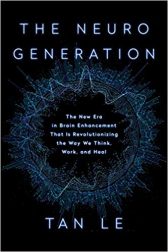