How does a true disruptor think, act and behave? What is the quality in a truly disruptive person that causes them to literally make opportunity when they need it?

What leadership and life philosophy does it take to disrupt for the positive? What tools can an individual learn that will enable them to reach new success by becoming a disruptive thinker? Known as the “Thought Leader in Disruption,” Todd Mitchem teaches how to do just this in his presentation based on his latest book, YOU, DISRUPTED; Seizing the life you want by shaking, breaking, and challenging everything, (Prometheus/Random House). Todd guides participants around redefining risk, obliterating crisis, and challenging the norm, to overcome roadblocks on the way to success. Through a detailed look into personal ownership, he brings the group to breakthrough results, thus becoming more powerful disrupted versions of themselves.

Look Up! - How to achieve your goals by shaking, breaking and challenging your thinking

Adults make an average of 35,000 decisions on a daily basis. Each choice comes with a degree of impact which can change the course of a person’s life dramatically. The good news is that each of us as individuals are ultimately in charge of those decisions, thus also in ...

Adults make an average of 35,000 decisions on a daily basis. Each choice comes with a degree of impact which can change the course of a person’s life dramatically. The good news is that each of us as individuals are ultimately in charge of those decisions, thus also in control of the impact.

Author, TEDx presenter and leadership expert Todd Mitchem is an engaging professional motivational keynote speaker who teaches audiences how to overcome the most difficult challenges in their own personal and work life. In his presentation, “Look Up,” based on learning from Todd’s new book, YOU DISRUPTED (Prometheus/Random House), he takes the group on a journey into his experiences as a leader, leadership coach, and successful entrepreneur while giving practical and easy to apply lessons which can be easily applied to their lives in a diverse way.

For leaders, Todd also can add his custom two-hour accompanying workshop, Look Up Leader, which is a deeper dive on how to apply the lessons as a leader in any business environment.

Big Data, Blockchain, Internet of Things (IoT) and the future of accountability

The rapid adoption of information technology such as Blockchain, Internet of Things (IoT) and Big Data Analytics is reshaping every aspect of our economy, society, and technology. We have already witnessed an expansion of groundbreaking innovations, and yet we are at another ...

The rapid adoption of information technology such as Blockchain, Internet of Things (IoT) and Big Data Analytics is reshaping every aspect of our economy, society, and technology. We have already witnessed an expansion of groundbreaking innovations, and yet we are at another technological frontier that’s guiding our society to a level of personal and professional transparency and accountability we have never witnessed. Todd has gathered experience in these areas through his multiple successful startups focusing on technology, human connection, and now his work as the CEO of a disruptive application to empower its users. Todd’s presentation is filled with thought-provoking reflections and challenging questions without all the technologically dull language.  As we move toward a culture of hyper-data quantification we will all be asking ourselves, what is the value of our data, our behaviors, and how the future will have accountability and transparency already built into it. This presentation is for executive, managerial, and general audiences who have a strong desire to know how these combined technological trends will impact them and their business.

Cryptocurrency, Blockchain, and the future of opportunity

Blockchain is the backbone of a multidimensional information technology that gave rise to cryptocurrency, smart contracts, and countless other decentralized applications for every sector of the economy. It is a gateway to re-conceptualize technology and its use in the ...

Blockchain is the backbone of a multidimensional information technology that gave rise to cryptocurrency, smart contracts, and countless other decentralized applications for every sector of the economy. It is a gateway to re-conceptualize technology and its use in the worldwide eco-system. The cryptocurrency movement is providing everyone, of any background or nation, an unprecedented opportunity for transacting within a global peer-to-peer community thus changing the way we transact forever. As the CEO of a fintech (financial technology) company, BUILD1x, Todd Mitchem and his team are utilizing blockchain applications to build a platform which provides practical tools for a dynamic marketplace with changing needs. The presentation will give an insight into what opportunities, as well as challenges, can be found in the rapidly evolving blockchain and cryptocurrency world. But it will also shed light on lessons learned about how to find or create your own opportunity in a climate of rapid change.

Todd Mitchem started out in life as a giant baby. No joke…at birth, Todd weighed 11.5lbs and was over 23″ long. Talk about being disruptive! It was no wonder that being on stage, leading, taking charge, and speaking was to be his focuses. He was a big presence from the beginning.

Todd first launched his career in the performing world where he studied Meisner technique acting at the Baron Brown studio in Los Angeles as well as improv comedy at the famed Second City in Chicago. During this exciting time, the world saw Todd Mitchem perform in front of hundreds of thousands of people as a DJ, emcee, actor, comedian, television host and voice-over talent. His innovative style of combining comedy, dance music, theatrical dialogue, and audience participation left crowds fired up and begging for more.

His entertainment philosophy on interactive techniques to control crowds of all types and sizes opened the eyes of many major tour managers. In the late ’90s Mitchem opened as a warm-up act for various artists including N’Sync, Jimmy Buffet, Britney Spears, The Beach Boys, Journey, Brooks and Dunn, Ziggy Marley, Chaka Khan, and 38 Special. He has also entertained and motivated national corporate clients such as Coors Brewing, Seagrams, Prudential, Marriott Resorts & Hotels, and the American Cancer Society.

But he did not stop there. Todd also created an entertainment concept named, “Comedy You Can Dance To” which was featured at the famed Excalibur Nightclub in Chicago for over 20 years as well as Universal Studios in Orlando Florida.

Todd still combines music, comedy, and energy in every presentation he gives.

To broaden his business horizons, Todd then joined the team at Eagle’s Flight, a leadership, culture change and business innovation consultancy. There Mitchem worked his way through the company to become a Senior VP, master facilitator, leadership developer, and business development expert. He and his team at Eagle’s Flight worked to create robust and efficient solutions for some of the most challenging leadership and organizational issues in many of the world’s fortune 500 organizations.

While at Eagle’s Flight, Mitchem generated over $20mil in revenue for the company, facilitated interactive, experiential programs for over two hundred thousand participants, and coached hundreds of client leaders in five countries.

To this day, Mitchem utilizes business leadership, and management skills learned over a decade of dedicated service.

After his mother’s successful fight against a second cancer utilizing marijuana as a medicine, Todd was compelled to join the hyper fast-moving cannabis industry. His goal was to work with the largely renegade and outlaw organizations to raise standards and protect consumers. He leveraged all his previously learned skills in PR, speaking, leadership, and business operations to trail blaze for this new industry.

While in the cannabis industry, Mitchem pivoted into the tech industry briefly when he took on the role as CEO for the world’s first social network in the marijuana space, High There. He lead the team to explosive growth of over 300k users in less than eleven months. Because of his success, the company and Todd were featured in every major news outlet in the world.

High There, as it was called, boasted over 1mil conversations a month with a massive daily active user rating. The app grew faster than Twitter in its first year. Todd learned some vital lessons along the way about how to connect with consumers on a truly unique level as well as how to leverage media for maximum advantage in the marketplace.

In 2017 Todd Mitchem published a groundbreaking book outlining his life of positive disruptive behavior titled, YOU DISRUPTED, Seizing the life you want by shaking, breaking and challenging everything. (Prometheus/Random House) In the book, Todd teaches the reader to stop making excuses and start taking charge of the ONLY person they can control….themselves.

Now, as a top requested keynote speaker, as well as personal and business coach, Todd Mitchem is presenting a lifetime of wisdom to each audience and client he encounters.

Todd enjoys an abundant and peaceful life as he speaks around the world, coaches clients to success and works on his next book.

“What a ride life has been and continues to be! I have accomplished some amazing things, made a ton of mistakes, been up and down, but through it all, I learned, kept moving, and kept disrupting with a smile on my face. Someday when I am gone from this Earth I will go peacefully knowing that I gave it everything I had and soaked up every bit of joy I could.”

Todd Mitchem calls the Denver, Colorado area his home base along with the love of his life Diana, three amazing kids, and two dogs who think they are people too.

I highly recommend Todd Mitchem for personal and professional development. You will not only get results but you will be enlightened to making the world a better place.

Todd is a fantastic coach who can meet people wherever they are, whether a top-level executive or an individual contributor. He’s an amazing facilitator who fully engages his audience with his wit, his charm, and his expertise.

Global Head of Compliance Design and Delivery at Western Union

Todd is an exciting, engaging and fun performer who commands with ease any size audience. His willingness to mold his presentation to any group demonstrates his flexibility and the ease in which he does it shows how Todd is perfect for any event.

Owner at The Entertainment Experience 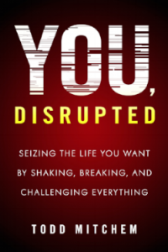