The Art of Possibility

Living Life on One Buttock

Benjamin Zander’s Key Accomplishments Include . . . Ben Zander is the acclaimed conductor of the Boston Philharmonic and a professor at the prestigious New England Conservatory of Music. Benjamin Zander’s many awards and honors include an Emmy nomination for conducting A New World of Music and his receipt of of the “Crystal Award” at the 1999 World Economic Forum in Davos in recognition of his contribution through culture and the arts to global understanding and peace.

Ben Zander is co-author, along with his wife, psychotherapist Rosamund Stone Zander, of The Art of Possibility. Benjamin Zander has also been the subject of a full-length BBC documentary which aired world-wide, was featured on CBS’s 60 Minutes and is the subject of Fast Company articles, among others.

World famous conductor, Benjamin Zander uses the metaphor of the orchestra and a life-time of experience conducting, coaching and teaching musicians to work his magic to overcome barriers to corporate productivity. This presentation sources fundamental changes in organizations.

In this new model of leadership, the conductor sees his job as awakening possibility in others. The orchestra is a group of highly trained individuals poised to coalesce into an effective whole. Passion, creativity and the desire to contribute are basic human instincts to be released.

In a symphony – as in business – one person can’t do it all. Great music is made when everyone gives his or her best. As the orchestra’s leader, it’s the conductor’s job to bring out the best in everyone, and Ben Zander does that better than anyone. Benjamin Zander’s presentation takes an audience on a journey that offers a startling new perspective on leadership. Through stories, music and concepts it causes a radical shift in perception. This is not a speech, it is an experience!

More About Ben Zander . . .
Bringing his insights as the conductor of a major symphony orchestra to leaders involved in transformation and change, Benjamin Zander has become a much sought-after speaker to major organizations all over the world, including: Shell, IBM, KPMG, Sprint, NASA and the US Army.

Ben Zander’s keynote programs bring his passion for greatness to audiences in a way that transforms them. Audience members leave his presentations with a compelling new understanding of leadership, teamwork and the keys to their own happiness and improved performance. Using music as both a metaphor and a medium, Benjamin Zander’s presentations are a high-energy tour de force. Ben Zander paces the stage… walks through the audience…cajoles, teases, chides…plays piano…and rouses audience members to belt out joyous harmonies.

“If you want to take your leadership skills to the next level, study the Art of Possibility with Ben Zander. In his presentation Ben explodes traditional leadership thinking and takes leadership out of the closet. He blows the door with its hinges off that closet, and you can never go back after working with Ben. His leadership view is unconventional, irreverent and bold. Its impact is without boundaries. I have seen Ben Zander’s teaching transform entire teams through ‘possibility’ in ways that are nothing short of magical with results that are nothing short of exemplary. He is a catalyst for excellence.”

“Ben Zander’s presentation was, literally, the most important contribution I’ve ever heard at a conference. Not only the music and the wit and the sheer fun, but the profound insights and wisdom. A moving and memorable occasion for all present. This was a breakthrough event in corporate creativity.” 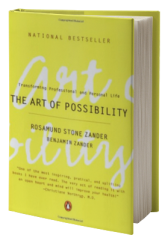