Cassie Campbell-Pascall laced up her first pair of skates when she was five years old. Today, she is a heroine of Canadian sport. A passionate and dynamic speaker, Campbell-Pascall draws on her accomplishments as the captain of the gold-medal winning Canadian Women’s Olympic Hockey Team to explore the themes of leadership, teamwork, motivation, and determination.

As the former captain of Canada’s National Women’s Hockey Team, Campbell-Pascall has taken part in three winter Olympic Games, seven International Ice Hockey Federation World Women’s Championships, nine Four Nations Cups, and the Torino Ice Tournament. She is the only captain, male or female, to lead Canada to two Olympic gold medals, and is the longest-serving captain in Canadian hockey history. Her teams have won 21 medals in total, comprised of 17 gold medals and four silver medals.

After retiring from professional hockey, Campbell-Pascall joined Hockey Night in Canada as a rink-side reporter, and became the first woman to do colour commentary on their broadcast. Her first book, H.E.A.R.T., examines her career and offers insight and advice on how to be a better athlete and a better person.

A philanthropist, Campbell-Pascall runs an annual street hockey tournament that has raised over $3.5 million dollars for the Ronald McDonald House. The Cassie Campbell Community center in her hometown of Brampton, Ontario, opened in 2008, and Prince Edward Island officially named March 14th as “Cassie Campbell Day.” In 2012, Campbell-Pascall received the Order of Hockey in Canada, and also received the Queen’s Diamond Jubilee from Prime Minister Stephen Harper. She was also inducted into the Alberta Sports Hall of Fame, the Ontario Sports Hall of Fame, and she was the first female hockey player to be inducted into Canada’s Sports Hall of Fame. 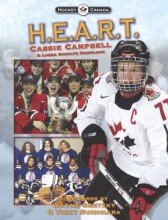