Suzanne Somers’ Key Accomplishments Include . . .
Suzanne Somers is one of America’s most popular and beloved personalities. In a multifaceted career that has spanned nearly three decades, she has achieved worldwide success as an actress, singer, comedienne, New York Times bestselling author, entrepreneur and inspirational keynote speaker.

Suzanne Somers has developed a tremendous following in America and around the world. From her debut in American Graffiti to Three’s Company, and through the last three decades with infomercials, television appearances, magazine articles, speaking engagements and best selling books, Suzanne Somers has become a one-woman lifestyle industry, while her popularity continues to not only hold strong, but grow! In January 2003, the entertainment community recognized Suzanne Somers with her own Star on the Hollywood Walk of Fame.

Always exploring different avenues of self-expression, Suzanne Somers has authored over 20 books, including several New York Times bestsellers. There are currently more than 10 million copies of Suzanne’s books in print. Her latest books include Breakthrough: Eight Steps to Wellness, Knockout: Interviews with Doctors Who Are Curing Cancer–And How to Prevent Getting It in the First Place and Sexy Forever: How to Fight Fat after Forty.

Suzanne Somers and her husband Alan Hamel, whom she first met in 1968, are something of an anomaly in Hollywood, having enjoyed an enduring relationship for over 35 years. Together, they have two sons, a daughter, and six grandchildren. 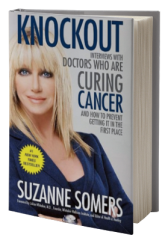 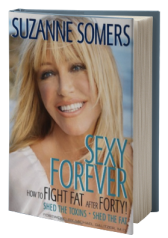