Best Selling Author and Expert on Communication and Gender Issues

Why Men Are the Way they Are

As the only man ever elected three times to the Board of the National Organization for Women in NYC, Dr. Warren Farrell was a pioneer of the women’s movement. Yet he is also the only man to be called by GQ “The Martin Luther King of the men’s movement.” He is, therefore, in the unique position to explain why men are the way they are in a female-positive way that still rings true to men. Perhaps this is why Dr. Farrell was chosen by the Financial Times as one of the world’s top 100 thought leaders of the 20th Century.

And Topic 3: “The Open Mind”? Dr. Farrell has the unique gift of facilitating both large audience-participation exercises and intimate couples’ communication courses. Therefore, his content—the startling evidence of a global boy crisis, its causes, and solutions that benefit both sexes—is but the first step; step two is teaching everyone in the audience how to listen with an open mind to all perspectives. The take-away? Knowing how to apply that open mind to every aspect of their lives—from partners to politics. Hence, Topic 3: “The Open Mind.”

Dr. Farrell’s findings, such as “The boy crisis resides where dads do not reside,” have been shared with both Democratic presidential candidates and the White House. His speaking was recognized by The White House, and after meetings with them, he was asked to compose a draft of a potential presentation for President Trump on the importance of dads for Father’s Day 2020.

Dr. Farrell’s books are published in over 50 countries, and in 19 languages.  He has appeared on over 1000 TV shows and been interviewed by Oprah, Barbara Walters, Peter Jennings, Katie Couric, Larry King, and Charlie Rose. He has frequently written for and been featured in The New York Times and publications worldwide. He chairs the Coalition to Create a White House Council on Boys and Men. See its web site and his YouTube channel for his recent appearances on national TV. Dr. Farrell has two daughters, lives with his wife in Mill Valley, California, and virtually at www.warrenfarrell.com. 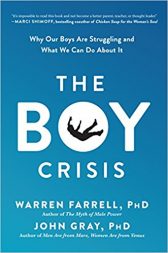 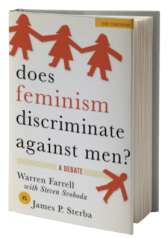