Let's Close a Deal: Turn Contacts Into Paying Customers for Your Company, Product, Service or Cause.

Master the dozens of details that go into the process of the pitch. Christine takes you step-by-step through preparing, presenting, revisiting, and following up a deal explaining how to: ...

Master the dozens of details that go into the process of the pitch. Christine takes you step-by-step through preparing, presenting, revisiting, and following up a deal explaining how to:

• Establish “Niche Notoriety” and build a top-of-mind awareness with your target audience;

•  “Perk-O-Late” a deal by identifying the surprise bonuses that will make or break a deal’s  success;

•  Re-treat, Re-evaluate, and Re-approach if you are turned down;

•  Look for business in all the “wrong” places;

•  Rescue a deal when it goes south with quick-on-your-feet recoveries;

"YOU, Inc. The Art of Selling Yourself" teaches you how to package and present the most important product of all: yourself.

Whether you need to make an impression on prospects, clients, or employers, Christine’s inspiring stories, fascinating examples and surprising tips will help you improve your life in ways you never imagined. Discover...

Whether you need to make an impression on prospects, clients, or employers, Christine’s inspiring stories, fascinating examples and surprising tips will help you improve your life in ways you never imagined. Discover:

•  Sixteen Candles and Shrewd Waitresses: Why life is more like high school than college– and what you can do about it;

•  From Robin Williams to Dr. Jekyll: Why surprising people isn’t a good idea after all;

•  The $18 Million Sandwich: How a few dollars and seconds could lead to startling success.

Whether you’re near the corner office or just starting out, Christine’s ideas will propel you even faster.

Christine Clifford’s Main Accomplishments Include . . . Her experience taught her how to market and sell products, services and herself. Now, Christine Clifford shares that message with others. For eight consecutive years as the retail services industry’s top salesperson, Christine Clifford directed accounts including Target, Toys ‘R’ Us, and Revlon. Ultimately Christine led her company to over $54 million in annual sales, and signed the industry’s record account with Procter & Gamble.

Diagnosed with breast cancer in 1994, Christine Clifford wrote a humorous portrayal of her story in Not Now, I’m Having A No Hair Day! which wasa nominee for 1996’s “Best Motivational Book”. Christine is also the author of Our Family Has Cancer, Too!, Inspiring Breakthrough Secrets to Live Your Dreams,Cancer Has Its Privileges, Your Guardian Angel’s Gift, and You, Inc: The Art of Selling Yourself, and contributed to threeChicken Soup books. Her latest book is Let’s Close a Deal! Turn Contacts into Paying Customers for Your Company, Product, Service or Cause.

Christine Clifford founded and runs The Cancer Club; the world’s largest producer of humorous and helpful products for people with cancer.

More About Christine Clifford . . .
Celebrating her 40th birthday, approaching her 20th wedding anniversary and buying the home of her dreams, Christine Clifford’s world was turned upside down when she was diagnosed with breast cancer, the disease that killed her mother at the age of 42. Christine believes that her diagnosis of cancer was a gift that allowed her to make changes in her life and reprioritize. Creating The Cancer Club, Christine Clifford uses her 30+ years of marketing expertise to spearhead “the most exciting new business venture to come along in many a decade”.

Today, Christine consults with companies on marketing with a special emphasis on branding and positioning. She now combines her wisdom, humor, insight and lifetime experiences to encourage great accomplishments in others. Don’t forget to laugh!™ and Don’t forget to ask!™ are her two trademarks.

From 1998 to 2002 she hosted the Christine Clifford Celebrity Golf Invitational, which raised over $1 million for breast cancer research and won the American Cancer Society’s “Council of Excellence” Award.

Christine Clifford also serves on the boards of Angel Foundation and the state chapter of the National Speakers’ Association.

“Christine, I really want to thank you attending our Club Siemens event in November. Your presentation was very well received by our customers, and many of them have since commented to me on how many great ideas they took away from our event based on your presentation. The advice that you offered was very consistent with the marketing initiatives we have been deploying with our Club Siemens members over the past few months. Thanks again for taking time out of your Thanksgiving weekend to spend with us.”

“I recently attended the Professional Club Marketing Association’s national strategic conference. Through many years of attending conferences, seminars and presentations targeting marketing and salespersons, I had become a bit jaded. I love selling and marketing, but felt most speakers simply took the same basic thoughts and put their spin on it. Not so with Christine Clifford. I WAS BLOWN AWAY!!!

With sharing her personal experiences and insight, it totally invigorated all who attended her two presentations. Every topic she covered had the audience captivated. I was literally enthralled and had wished she was booked for the entire day. I highly recommend Christine to others looking for a program that inspires people to reach their potential.”

“Thank you for being a world class speaker! You were everything we could have hoped for and  more. From our very first contact, your professionalism and warmth were evident, and you showed a genuine interest in what our organization is all about. You took the time to find out as much information as possible about us, and what we wanted you to convey to the audience. From a logistics standpoint, you could not have been easier to work with. We are pleased to give Christine the highest endorsement possible.” 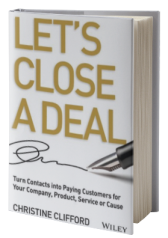