Live It! Winning in Life, Love and Business

Grow your Business to Thrive

Business Survival during COVD-19: How to Protect, Pivot and Profit

Jairek Robbins is a best-selling author, top performance speaker, and founder of Performance Coach University. Jairek has been coaching business owners, teams and individuals for over a decade to achieve world class results in work and life through his personal coaching. His coaching has helped them make more money (while working less!), lose weight, have more passion in their relationships and more focus and energy than ever before.

Jairek’s #1 Bestselling Book, “LIVE IT!” received raving reviews by Deepak Chopra, Brian Tracy and many others. The practical tools he shares in “LIVE IT!” can help anyone add deep meaning and purpose to their life while achieving massive success.

Jairek’s commitment to bettering humanity and himself began at an early age and was acknowledged with a Congressional Award – Gold Medal. He was awarded the highest honor for accomplishing over 400 hours of community service, 200 hours of personal development, 200 hours dedicated to physical fitness (he ran 2 marathons) and living overseas for an extended period (he lived in Uganda for 4 months volunteering) all within just 24 months. He accomplished all of this before the age of 24. 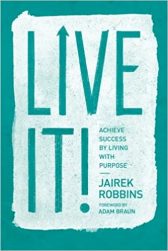